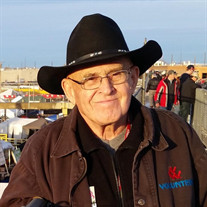 Orrin John Hanouw was born to John and Ora (Bend) Hanouw on March 26, 1937 on the kitchen table in Leland, Illinois, and passed away August 23, 2020, at Azria Healthcare in Central City, Nebraska at the age of 83 years, 4 months, and 28 days. He was one of five children born in the family. Orrin graduated from Leland High School in 1955 and was already working on a farm. Through his working years, all of his jobs reflected his love of agriculture and farming. Orrin was united in marriage to Nancy Lee Armstrong of Leland, Illinois, on August 30, 1958, and 4 children were born to them. Orrin & Nancy moved the family to Shickley, Nebraska in 1971. Orrin was active in many organizations including the Lions Club, Knights of Columbus, Shickley School Board, Nebraska Antique Tractor Pullers Association, he was a volunteer for National Western Stock Show and the Nebraska State Fair, he was a member of the Shickley Volunteer Fire Department, and he participated in the world record breaking tractor drive. He also enjoyed his responsibilities as the ‘candy man’ at the concession stand for Shickley ballgames. His hobbies included antique tractor pulling, tinkering for hours on his tractors, Cubs baseball, rodeos, and enjoying his grandchildren’s activities. His favorite tractors were Minneapolis Molines and he wouldn’t even consider owning a green tractor. Orrin was preceded in death by his father and mother; brothers Duane and Randy; and sisters Florence and Joan. He is survived by his wife Nancy of Hastings, Nebraska; son Greg (Stephanie) Hanouw of Aurora, Colorado; his daughters Linda (Bruce) Jasch of Hastings, Nebraska, Julie (Jerry) of Grand Island, Nebraska, Teresa (Shawn) Wendt of Hastings, Nebraska; grandchildren Tyler (Jamye), Lauren (Adam), Brooke (Derek), Benjamin (Sharidan), Abby (Noah), Amber,and Courtnie; great grandchildren Oliver John and one on the way; and many nieces and nephews. A Memorial Mass for Orrin was held at 10:30 a.m. on August 27, 2020 at the St. Mary Catholic Church in Shickley, Nebraska. Father Harlan Waskowiak officiated the service. Carol Grote accompanied the congregation in the singing “Amazing Grace,” “Here I Am Lord,” “I Am The Bread Of Life,” “Song Of Farewell,” and “How Great Thou Art.” A Graveside Committal of Ashes was held in the St. Mary’s Catholic Cemetery following the Memorial Service. Farmer & Son Funeral Home was in care of the arrangements and online condolences can be left at www.farmerandsonfuneralhome.com Memorials are suggested to St. Mary’s Catholic Church or Azria Healthcare in Central City.

Orrin John Hanouw was born to John and Ora (Bend) Hanouw on March 26, 1937 on the kitchen table in Leland, Illinois, and passed away August 23, 2020, at Azria Healthcare in Central City, Nebraska at the age of 83 years, 4 months, and 28 days.... View Obituary & Service Information

The family of Orrin J. Hanouw created this Life Tributes page to make it easy to share your memories.

Orrin John Hanouw was born to John and Ora (Bend) Hanouw on March...

Send flowers to the Hanouw family.