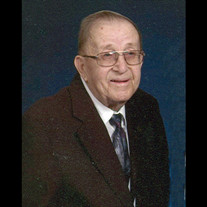 Orval Max Ellison was born to Melvin I. and Bessie G. (Kennard) Ellison on October 31, 1919 near Geneva, Nebraska. He passed away on Tuesday, May 16, 2017 at Heritage Crossings Nursing Home at the age of 97 years, 6 months, and 15 days. He was one of 5 children born in the family. Orval attended School District 3 one year and then the family moved to Geneva in 1926. Orval then attended Geneva Public Schools through the 11th grade before taking a job with his father at the service station. On April 3, 1942, Orval entered the United State’s Army during World War II. He took basic training in the infantry at Camp Walter, Texas and was then transferred to the medics in Quantico, Virginia. While serving overseas, he was in England and France. He served 3 years and 7 months before being discharged on November 2, 1945. Orval married Irene Zimbelmann of Sutton, Nebraska on January 20, 1943. They were married for over 69 years, and 4 children were born to the union. Orval was involved in the filling station business running Ellison’s DX Station from 1947 to 1986. In his free time, Orval loved to go fishing and camping and enjoyed most sports. He also enjoyed working in his workshop and meeting friends at the café for coffee. While still at home, he could often be found working in his yard or feeding the birds and squirrels. Orval and Irene also enjoyed traveling during their retirement years going to Texas in their 5th wheel and taking trips to Germany and Hawaii. A highlight of Orval’s travels was when he and Irene went to the Holy Land in 1984. Orval was preceded in death by his parents, Melvin & Bessie; wife, Irene; sisters Orpha Kelch and Mildred Bettger; brothers Roger Ellison and Rex Ellison; daughter-in-law Rose Ann Ellison; grandson Brian Scott Ellison; and son-in-law Patrick Carlson. He is survived by his son Richard Ellison and wife Vera of Geneva; daughters Nancy Domling and husband Galen of Fairmont, NE, Judy Smith of Sutton, NE and husband Chuck of Henderson, NE, and Virginia Carlson of Sutton, NE, 7 grandchildren, 2 step grandchildren, 16 great grandchildren and 1 step great grandchild; nieces, nephews, and cousins. A funeral service for Orval was held on Friday, May 19, 2017 at 10:30 a.m. at the United Methodist Church in Geneva. Pastor Michelle Gowin officiated the service. Sondra Myers accompanied Delwin Myers in the singing of “Amazing Grace” and “Because He Lives.” She also accompanied the congregation in the singing of “How Great Thou Art.” Pallbearers for the service included John Ellison, Cory Ellison, Jerrett Domling, Jason Domling, John Schurman, and Devin Lott. Interment was held in the Geneva Public Cemetery with Military Rites performed by the Geneva VFW Samuel J. Marsh Post 7102. Memorials are directed to the United Methodist Church in Geneva. Farmer & Son Funeral Home conducted services and online condolences may be left at www.farmerandsonfuneralhome.com.

Orval Max Ellison was born to Melvin I. and Bessie G. (Kennard) Ellison on October 31, 1919 near Geneva, Nebraska. He passed away on Tuesday, May 16, 2017 at Heritage Crossings Nursing Home at the age of 97 years, 6 months, and 15 days. He... View Obituary & Service Information

The family of Orval M. Ellison created this Life Tributes page to make it easy to share your memories.

Orval Max Ellison was born to Melvin I. and Bessie G. (Kennard)...

Send flowers to the Ellison family.