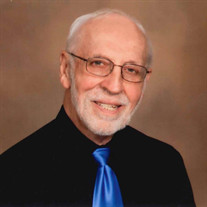 A Private Family Funeral Service for Delmar will be held on Friday, February 19, 2021 at Prince Of Peace Lutheran Church with Vicar Tim Stacy presiding. Visitation will be held on Thursday, February 18, 2021 from 1:00 p.m. until 8:00 p.m. at Farmer & Son Funeral Home in Geneva, Nebraska. A Public Memorial Service for Delmar will be held at a later date and time. Private Family Inurnment will be held at a later date. Memorials may be directed to Teammates Mentoring or Prince Of Peace Lutheran Church. A Livestream Video of the funeral service will begin at 10:30 a.m. on Friday, February 19, 2021. To view the Livestream Video you can go to Farmer & Son Funeral Home's Facebook Page or in your search engine type @friendlyfuneraldirectors and click the link to Farmer & Son or click this link https://www.facebook.com/friendlyfuneraldirectors/Funeral and it should direct you to our Facebook Page. ***Masks will be required at all functions for Delmar** Fred Delmar Klover died at his home in Geneva, Nebraska, on Sunday, February 14, 2021, at the age of 81 years, 7 months, and 28 days. Delmar was born to Fred C. Klover and his wife, Lorina J. (Herman) Klover at Odell, Nebraska, on June 17, 1939. He was baptized into the Christian faith by Pastor John Janssen on June 25, 1939, at the home of his grandparents near the church. Delmar grew up on adjoining farmsteads along Highway #77 approximately a mile south of the state line in Kansas. He attended Sunrise (District 114) School located between the two farmsteads. On March 29, 1953, he was confirmed in the faith at Immanuel (State Line) Lutheran Church in a class of seven boys. The pastor was Pastor Karl Fullgrabe. Delmar graduated from Marysville High School with the class of 1957. The following fall he was one of four young men from the congregation to begin studies at Wartburg College in Waverly, Iowa. He received his Bachelor of Arts degree from Wartburg on June 2, 1961. Two days later he was united in marriage with his college sweetheart, Deanna Childers, at St. John’s Lutheran Church in Mendota, Illinois. To this union three children were born: Katherine Ann and Kurtis Allen during seminary years and Kristin Allison in their first parish. In September, 1961, he started his theological training at Wartburg Seminary in Dubuque, Iowa. In September, 1963, he began a nine-month internship at St. Paul’s Lutheran Church in Youngstown, Ohio. During the summer of 1964 he participated in a quarter of clinical pastoral education at Milwaukee General Hospital in Wisconsin. He received his Master of Divinity degree from Wartburg in May of 1965. On June 6, 1965, he was ordained into the pastoral ministry of The American Lutheran Church along with Marvin Ehnen and Arlyn Saathoff, at Immanuel Lutheran, State Line. On July 4, 1965, Delmar was installed as pastor of United Lutheran Church in Hampton, Nebraska. In June of 1970 he, along with eleven families of United, started a second preaching and teaching point in nearby Aurora. In June of 1971, this faith community grew to become a separate congregation called Messiah Lutheran Church. They officially called Delmar to continue to be their pastor, making Hampton and Aurora a two-point parish. In June of 1974, Delmar accepted a call to serve as Pastor of Peace Lutheran Church and School in Deshler, Nebraska. He served Peace for twelve years until all three children had graduated from high school. In July, 1986, Delmar began serving as pastor of American Lutheran Church in Cozad, Nebraska. He served there until August, 1992, when he became pastor of Friedens Lutheran in Lincoln, Nebraska. He served there until his retirement in October, 2004. He and Deanna then moved to Geneva, Nebraska, which has been their home ever since. In his retirement Delmar enjoyed serving as a transitional pastor at Immanuel Lutheran Church in Glenvil, Lutheran Church of the Good Shepherd in Hastings, Prince of Peace Lutheran Church in Geneva and Zion Lutheran Church in Clay Center, all in Nebraska. In his retirement he also enjoyed serving as guest pastor in a great many Lutheran churches in the greater Geneva area. During his pastoral ministry Delmar also enjoyed serving the local community and the Church beyond the local congregation in a variety of ways. In Geneva, this included working with Teammates Mentoring as both a board member and mentor, as well as a chaplain for Fillmore County Emergency Management. At the time of his death, Delmar was an active member of Prince of Peace Lutheran Church in Geneva. His hobbies included singing, family history, bird watching, gardening and yard work. He also enjoyed walking and being physically active as long as his health and strength allowed. His great loves were his Lord, his family, and his Church. Delmar was preceded in death by his parents and in-laws, Roy and Minnie Childers. Survivors include wife, Deanna; daughters and sons-in-law, Katherine and Keith Uhlinger of Moses Lake, Washington, and Kristin and Danny Nun of Ohiowa, Nebraska; son and daughter-in-law, Kurtis and Deborah Klover of Hebron, Nebraska; sister, Darlene Mills of Cotopaxi, Colorado; six grandchildren: Cortney (Simon) James of Franklin, Nebraska, Kory Klover of Hebron, Nebraska, Sierra and Conner Uhlinger of Moses Lake, Washington, Brevann (Kelly) Nun of Manhattan, Kansas, and Marissa Nun of Omaha, Nebraska; four great granddaughters, Halsey, Henley, Hadley and Hopelyn James of Franklin, Nebraska; brother-in-law and spouse, Roger and Dorothy Childers of Minneapolis, Minnesota; aunt, Henrietta Oltman of Wymore, Nebraska; special family friend, Bree Atmore of York, Nebraska; many nieces, nephews, cousins and other relatives and friends.

The family of Pastor Delmar Klover created this Life Tributes page to make it easy to share your memories.

A Private Family Funeral Service for Delmar will be held on Friday,...

Send flowers to the Klover family.