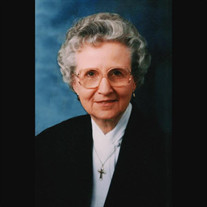 Patricia Biegert was born on September 6, 1925 to Robert & Georgia (Murphy) Erdkamp at Lincoln, Nebraska. She passed away on Wednesday, February 3, 2021 at Heritage Crossings in Geneva, Nebraska at the age of 95 years, 4 months, and 28 days. She was one of 7 children born in the family. Pat was baptized and confirmed at St. Stephen Catholic Church and attended St. Stephen grade school in Exeter, Nebraska. She graduated with the class of 1942 from Exeter High School. After high school, she went to work for Lincoln Telephone & Telegraph Company as a Telephone Operator and Night Chief until May 1949. On June 9, 1949, Pat was united in the Sacrament of Matrimony to Waldean (Dean) Biegert of Shickley, Nebraska. To this union two children were born: Carol & Rex. The family lived on a farm east of Shickley, where Dean and his brothers farmed and fed cattle. The family was also engaged in a liquid fertilizer and cattle feed business in Shickley for many years. Pat taught Catechism at St. Mary Catholic Church for several years. She was also assistant Girl Scout Leader in Shickley. Two years after Pat’s father passed away, her mother’s health began to fail and she came to live with Dean & Pat on the farm. They were able to care for her until her passing in 1976. Pat was a member of the St. Joseph Catholic Church in Geneva where she served with the Ladies Altar Society and Ladies UGLY (Unconditionally God Love’s You) Quilt Group. The UGLY group was able to complete nearly 1000 quilts to give to various organizations who distributed them to needy families and homeless people. Pat also spent many hours with her sister, Kay, who resided at the Fairview Manor in Fairmont for many years. She also volunteered for many years at the immunization clinic in Geneva. Pat will be remembered for her quiet, gentle manner and her unwavering faith in God. Pat was preceded in death by her parents, Robert & Georgia; husband Waldean; brothers Don (Pauline, Terry), Bob (Ruth) and Leonard (Elenor) Erdkamp; sisters Loretta (Frank) Vrbka & Kay (Steve)Klemm; and brothers-in-law Sam Gillan, Virgil (Helen) and John (Maurine) Biegert. She is survived by her daughter, Carol Peppie and husband Gary of Ohiowa, Nebraska; son, Rex Biegert and wife Karen of Shickley, Nebraska; sister, Marge Gillan of Arvada, Colorado; brother-in-law Max Biegert and wife Thelma of Phoenix, Arizona; grandchildren Lisa Kimbrough and husband Kevin and their children Madeline and Thayne and Julie Stutzman and husband Jim and their children Tucker and Jasper all of Ohiowa, Nebraska, Deric Lichty and wife Erin of Atlantic Beach, Florida and their children Wyatt and Gradin, and Michael Biegert and wife Teryn of Shickley, Nebraska; and many nieces, nephews and friends. A Funeral Mass for Pat was held on Friday, February 5, 2021 at 10:30 a.m. at St. Mary Catholic Church in Shickley, Nebraska. A Rosary was prayed at 10:00 a.m. at the Church prior to the Mass. Father Harlan Waskowiak officiated the Services. Carol Grote was the organist and Pat Mau was the cantor for the service. The musical selections consisted of “Amazing Grace,” “Ave Maria,” “I Am The Bread Of Life,” and “Song Of Farewell.” Pallbearers for the service included Lisa Kimbrough, Kevin Kimbrough, Julie Stutzman, Jim Stutzman, Deric Lichty, Erin Lichty, Michael Biegert, Teryn Biegert, Madeline Kimbrough, Thayne Kimbrough, Tucker Stutzman, Jasper Stutzman, Wyatt Lichty, and Gradin Lichty. Interment was held in the Shickley Public Cemetery following the Funeral Mass. Farmer & Son Funeral Home was in care of the arrangements and online condolences can be left at www.farmerandsonfuneralhome.com Memorials are suggested to the St. Joseph Catholic Church or the St. Mary Catholic Church.

Patricia Biegert was born on September 6, 1925 to Robert & Georgia (Murphy) Erdkamp at Lincoln, Nebraska. She passed away on Wednesday, February 3, 2021 at Heritage Crossings in Geneva, Nebraska at the age of 95 years, 4 months, and 28 days.... View Obituary & Service Information

The family of Pat Biegert created this Life Tributes page to make it easy to share your memories.

Send flowers to the Biegert family.