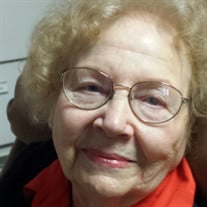 A Funeral Service for Patricia will be held on Thursday, January 4, 2018 at 10:30 a.m. at Trinity Lutheran Church in Bruning, Nebraska with Pastor Stuart Sell officiating. Visitation will be held on Wednesday, January 3, 2018 from 1:00 p.m. until 8:00 p.m. at Farmer & Son Funeral Home in Geneva. Graveside Services will be conducted at the Bruning Public Cemetery following the funeral service. Memorials are to be directed to the family for a later designation. Patricia Ann Bowman, age 98 yrs. 8 months, 13 days, passed away Saturday, December 30, 2017 at Heritage Care Center in Fairbury. Pat was born to Ray and Lena (Doty) at home in Belvidere, April 17, 1919. She graduated from Belvidere High School in 1937. Pat worked at Gold’s Department Store in Lincoln after high school, at an aircraft defense plant assembly plant and as an operator in Los Angeles. Later she was assigned to Lincoln Western Electric assembling telephones. After marriage, Pat worked at the Bruning Drug store and as a postal clerk in the Bruning Post Office until she became the postmaster 1978-1990. Pat married Lorin Bowman on February 18, 1948 in Lincoln. She was baptized, confirmed and became a member of Trinity Lutheran church that year. She is survived by children Lana (Dan) Wilken of Beatrice, Jackie Bowman of Aurora and Larry Bowman, Bruning, grandchildren Angela (Brian) Fossler of Beatrice, Melissa Carper, Pickrell, Lenny (Carla) Bowman, Bruning, Dan Bowman, Scottsdale, AZ and Tony Bowman, Austin, TX, Great grandchildren Jadyn and Liam Bowman of Bruning, several nieces, nephews and cousins. She was preceded in death by her parents, husband Lorin, and brother Guy Bailey.

A Funeral Service for Patricia will be held on Thursday, January 4, 2018 at 10:30 a.m. at Trinity Lutheran Church in Bruning, Nebraska with Pastor Stuart Sell officiating. Visitation will be held on Wednesday, January 3, 2018 from 1:00 p.m.... View Obituary & Service Information

The family of Patricia A. Bowman created this Life Tributes page to make it easy to share your memories.

A Funeral Service for Patricia will be held on Thursday, January...