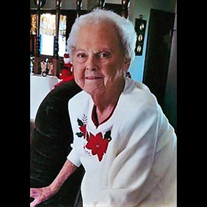 Patricia Ruth (Schmale) Dunse was born to Letha (lnderlied) and Alfred Schmale in Beatrice, Nebraska on December 9, 1928. She passed away at the Fillmore County Hospital in Geneva, Nebraska on December 15, 2017 at the age of 89 years and 6 days surrounded by her loving family. She was baptized by Pastor John Schaff at Trinity Lutheran Church in DeWitt, Nebraska, where she was also confirmed. Pat graduated from DeWitt High School in 1946. Pat met her future husband, Ivan Dunse on a blind date in October of 1947. They were married 3 months later on January 4, 1948 at Trinity Lutheran Church in De Witt, Nebraska. Pat and Ivan briefly lived in Omaha, Nebraska after they were married. They moved to Ohiowa in order to begin farming. Ivan taught Pat the artistic talent of crochet early in their marriage, and it quickly became a passion for Pat. She has made beautiful afghans and doilies and more last names for people than her family can count. Pat, with Ivan's help, created the memorable 'The Last Supper' that they donated to Saint John's Lutheran Church in Ohiowa. Pat was active in Saint John's Church. She was an active member in the Ohiowa Legion Auxiliary. Pat also worked for a time as a cook for the Ohiowa Public SchooL Pat and Ivan loved to travel with friends to numerous places. They even made 38 trips to California to visit family over the years. Pat and Ivan were the proud parents of three children: Gaylen, Barbara, and Ricky. Gaylen married Barb Krupicka and had two sons, Steve and Matt. Barbara married William Hanson and had two children, Steven and Desiree. Ivan and Pat have 14 great grandchildren. Throughout her life, Pat greatly enjoyed attending the numerous sporting events of her children, her grandsons and her great-grandchildren. From 1976-1986 Pat and Ivan owned the Ohiowa Bar and Grill, where they sponsored numerous trips to watch the Kansas City Royals and Chiefs' games. Pat was preceded in death by her parents and parents-in-law; her son Ricky; and her husband, Ivan. Pat is survived by her son and daughter-in-law- Gaylen and Barb Dunse of Ohiowa, Nebraska; her daughter and son-in-law Barbara and Bill Hanson of Lincoln, Nebraska; and her grandchildren Steve & Lynette Dunse of Malcolm, Nebraska, Matt Dunse and significant other Eve Neeman of Cortland, Nebraska, Steve and Beth Hanson of Searcy, Arkansas, and Desiree and Adam Hammersley of Hernando, Mississippi; 14 great grandchildren; and sister JoAnn Fruehling of Beatrice, Nebraska. A Funeral Service for Pat was held on Tuesday, December 19, 2017 at 2:00 p.m. at St. John’s Lutheran Church in Ohiowa, Nebraska. Pastor Judy Nuss and PMA Jim Germer officiated the service. Nancy Cradduck accompanied the congregation in the singing of “Amazing Grace,” “How Great Thou Art,” and “Lift High The Cross.” Pallbearers for the service included Steve Dunse, Matt Dunse, Larry Nun, Steve Ozenbaugh, Allan Garland, and Verryl Meyer. Interment was held in the Ohiowa Public Cemetery following the Funeral Service. Farmer & Son Funeral Home conducted the services and online condolences can be left at www.farmerandsonfuneralhome.com. Memorials are suggested to the family for later designation.

The family of Patricia R. "Pat" Dunse created this Life Tributes page to make it easy to share your memories.

Patricia Ruth (Schmale) Dunse was born to Letha (lnderlied) and...

Send flowers to the Dunse family.