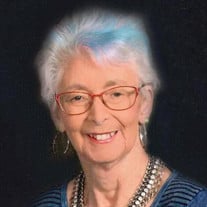 A Memorial Service for Patricia will be held on Friday, March 4, 2022 at 11:00 a.m. at the United Methodist Church in Geneva, Nebraska with Pastor Doug Griger and Kim Dunker presiding. No visitation - Cremation. Committal of Ashes will be held at a later date in the Geneva Public Cemetery. Memorials are to be directed to York Adopt A-Pet. To view the Livestream Video you can go to Farmer & Son Funeral Home's Facebook Page or in your search engine type @friendlyfuneraldirectors and click the link to Farmer & Son or click this link https://www.facebook.com/friendlyfuneraldirectors/Funeral and it should direct you to our Facebook Page. Family, Friends, Flowers, Faith, and Fun. Patricia Ann Quick was born to Leonard E. Bazelman and Marjorie D. (Fox) Bazelman on October 16, 1943 in O’Neill, Nebraska. She passed away at Fairview Manor in Fairmont, Nebraska on February 24, 2022. Her family remained in the O’Neill area until moving to Geneva for Patricia’s junior year in high school. Following graduation, Patricia attended Beauty School in Hastings, Nebraska, a passion that would become her profession for the next 40+ years, including owning and operating Nu Style Beauty Shop for 35 years. After selling her salon she worked for several years at Rainbow World Daycare, finding great joy in sharing her love and compassion with countless children. After her retirement, she spent much of her time on two of her great loves, her flower gardens and card making. If the weather was nice you could count on finding her outside in the yard tending to one of her many flower beds. And on those cold or rainy days, she would be at her desk creating new cards or writing letters to friends and family. Patricia was married to Keith L. Sole from 1966 to 1973. During this time, she gave birth to her son, Justin K. Sole, on December 8, 1969. She met James C. Quick in 1982 and they were married April 16, 1983. Pat and Jim spent the next 38 years following their dreams and sharing in all that life has to offer. They went on many bus tours and vacations throughout the years; including Alaska, Hawaii, and the New England states. They participated in the community Thanksgiving and Christmas dinners for several years and were active members of the United Methodist Church. Family and friends were always the source of her greatest joys. Whether near or far, someone she saw every day or every once in a blue moon, she loved being able to sit down and catch up, enjoy a meal together, play a game of cards or dominoes, or reminisce. Patricia was preceded in death by her father, Leonard E. Bazelman, mother, Marjorie D. (Fox) Bazelman, and her brother, Richard Bazelman. She is survived by her husband, James C. Quick, of Geneva, son, Justin K. Sole and Kenneth Knappert, of Fairmont, sister, Margaret Shaffer, of Fullerton, California, nieces, Angela Bazelman and Tracy Bazelman, of Phoenix, Arizona, her faithful furry companion, Kona Jo, “grandkids”, Bailey and Wyatt Hafer, of Geneva, along with many other cousins, family members, and friends. IN HER OWN WORDS, Patricia wrote the following to be a part of her obituary. “The best way for those of us who respected and loved Patricia Ann Quick to honor her life is to ask ourselves if we believe. If we believe, then we must not sorrow as others who have no hope. If we do not believe, certainly hopelessness is an appropriate response to this loss, for there is no hope apart from Christ. Let us ponder that reality in honor of Patricia and the Christ she served.” “The passage read provides the best conclusion possible for our memorial of Patricia. It says - because if we believe Jesus died and rose again, we shall also rise again because Christ is coming back for us, because those who died in Christ shall rise, because one day we shall be with the Lord forever, never again to be separated from those we love. Comfort one another with these words.” Suggested passages- Hebrews 10:19-25, John 11:25-26, John 3:16.

A Memorial Service for Patricia will be held on Friday, March 4, 2022 at 11:00 a.m. at the United Methodist Church in Geneva, Nebraska with Pastor Doug Griger and Kim Dunker presiding. No visitation - Cremation. Committal of Ashes will be... View Obituary & Service Information

The family of Patricia A. Quick created this Life Tributes page to make it easy to share your memories.

A Memorial Service for Patricia will be held on Friday, March...

Send flowers to the Quick family.