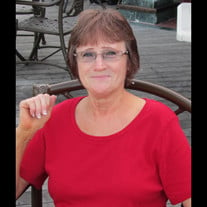 Patsy Christine Niederklein was born to LeRoy J. Grubbs and Phyllis R. (Shotsman) Grubbs on October 21, 1953 in Fairbury, NE and passed away February 16, 2018 at Heritage Crossings in Geneva, NE at the age of 64. She was one of 4 children in the family. Patsy was baptized as an adult at St John’s Lutheran Church. She was united in marriage to Galen Niederklein of Tobias on March 11, 1978. Patsy & Galen were taking foster parenting classes and were blessed with the placement of Tanya on Jan 31 and Toni on Feb 3, 1992 in their home. The twin girls were later adopted on May 6, 1994. Patsy grew up in Fairbury, NE and graduated from Fairbury High School in 1972. After high school she did babysitting and housekeeping for a family in Fairbury before taking employment at Kellwood Coat Factory where she worked until shortly after marriage. Following their honeymoon they moved to a farm southeast of Ohiowa. In March of 1993 they moved onto the family farm and in August 2013 moved into their newly built home located on the same farmstead. During all her years on the farm Patsy kept busy assisting Galen with various farm activities, including livestock chores, running the grain cart, unloading hay bales, cutting thistles and fixing fence. Patsy enjoyed spending numerous hours a week weeding and tending to her flowers and gardens. She decorated their house with the beautiful flowers from her flowerbeds in addition to the many houseplants she cared for with her green thumb. Her gardens would produce enough that she shared with neighbors and friends. Her delicious zucchini cookies will be missed by many. She served on various church committees including Altar Guild, Flower Committee and Christian Ed. She also taught Sunday School and Vacation Bible School. Patsy loved the time she spent with her dear friend, Lynn Mussman, especially their weekend shopping trips. Patsy and Galen enjoyed their trips they took with their friends Rex & Lynn to New Mexico and Jamaica. Patsy and her family found time to take a trip together to Washington DC which she enjoyed tremendously. Patsy passed away due to effects from a series of strokes she had endured in the last three years. Patsy was preceded in death by her parents, LeRoy & Phyllis Grubbs. She is survived by her husband Galen of Tobias, daughters Toni Niederklein of Grand Island and Tanya Anderson (friend Tim Good) of Beatrice, grandson Bentley Anderson of Beatrice, brothers Terry (LaDonna) Grubbs of Lincoln, Dan Grubbs and Tom Grubbs of Fairbury, sister in laws and brother in laws Kathy & Dale Hausen of Columbus, Tonya & Scott Wagner of Lincoln, and Terri & Kevin Niederklein of Omaha, nieces and nephews and numerous other relatives and friends. A Funeral Service for Patsy was held on Monday, February 19, 2018 at 10:30 a.m. at the St. John’s Lutheran Church in Ohiowa. PMA Jim Germer officiated the service. Nancy Cradduck accompanied the congregation in the singing of “On Eagles’ Wings” and “Amazing Grace.” The recorded selection “I Can Only Imagine” was also played during the service. Pallbearers the service included Tyler Niderklein, Boston Wagner, Chris Garrett, Steven Wiersma, Chris Mussman, Henry Mussman, and Brandon Grubbs. Interment was held in the Ohiowa Public Cemetery following the Funeral Service. Farmer & Son Funeral Home conducted the services and online condolences can be left at www.farmerandsonfuneralhome.com. Memorials are suggested to the St. John’s Lutheran Church in Ohiowa.

Patsy Christine Niederklein was born to LeRoy J. Grubbs and Phyllis R. (Shotsman) Grubbs on October 21, 1953 in Fairbury, NE and passed away February 16, 2018 at Heritage Crossings in Geneva, NE at the age of 64. She was one of 4 children in... View Obituary & Service Information

The family of Patsy C. Niederklein created this Life Tributes page to make it easy to share your memories.

Send flowers to the Niederklein family.