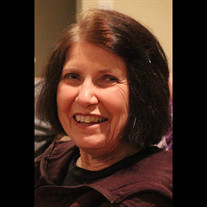 Patty Ann was born to Virgil H. Fredricks and Mildred E. Yost Fredricks of Glenvil on November 26, 1949 in Hastings, Nebraska, the fourth of five children. She passed away on Friday, March 22, 2019 at Bryan West Hospital in Lincoln, at the age of 69. Patt attended the one-room Willowdale School through the 8th grade and was a member of the first graduating class of Sandy Creek High School in 1968. She graduated with a B.A. in English from Dana College in 1972, and married John M. Lentfer of Bruning on August 5, 1972. She obtained further educational certification at the University of Nebraska-Kearney. The couple first moved to Elba, where Patt taught high school English, and then lived in Grand Island, Omaha, and Hebron before settling in Bruning to farm. Patt was a devoted educator for the first half of her career, finishing as the gifted/enrichment teacher at Geneva Elementary School. Since 2001, she served as the Executive Director of the Fillmore County Development Corporation until her retirement on November 30, 2018. Patt and John stopped farming in 2001 and bought Shickley Irrigation in 2002. They moved to Geneva in 2011. Patt had three children, Jennifer, Jacob, and Preston. One of her greatest gifts to them was to share her love of learning. She enjoyed supporting them in 4-H, music, and sports into their college years. The lights of Patt’s life were her three grandchildren: Easton, Eli and Drake. Patt was a “do-er” in her community, a lover of the arts, and an avid reader. She set a gorgeous table and served delicious meals to her family and friends. Patt was a regular blood donor, served as a Meals on Wheels volunteer, was an active Nebraska Pork Producers member, and was a choir member at Dana College and every church of which she was a member. At Trinity Lutheran in Bruning, Patt was a member of Circle 5 and a Sunday school and Bible school teacher. An always-encouraging friend, she could be found out on the town once a month with her “MOTL” (Mothers on the Loose) Club. Many will remember her for her kindness, creativity, and loyalty. Patt is preceded in death by her parents, Virgil and Mildred Fredricks, aunt Helen and husband Bud Frickey, and uncle Ray Fredricks, brother Dave Fredricks, niece Jodie Fredricks, and father-in-law Julius Lentfer, Jr. She is survived by her husband John of Geneva, daughter Jennifer of Washington, D.C., son Jacob, wife Chelsea, and grandsons Easton and Eli of Manhattan, Kansas, son Preston, wife Camie, and grandson Drake of Gibbon, and mother-in-law Lillian Lentfer of Bruning. She is also survived by brother Alan Fredricks and wife Carolyn of Hastings, sister-in-law Sue Fredricks of Hastings, sister Kay Davis and husband Ron of Blue Hill, brother Paul Fredricks and wife Ronna of Glenvil, aunt Mary Fredricks and cousin Myra Fredricks of Hastings, brother-in-law Alan Lentfer and wife Debby of Thornton, Colorado, sister-in-law Audrey Shaneyfelt and husband Randy of Loch Lloyd, Missouri, and brother-in-law Scott Lentfer and wife Marlene of Kearney. Patt was aunt to 17 beloved nieces and nephews and 24 grand nieces and nephews. A Memorial Service for Patt was held on Thursday, March 28, 2019 at 11:00 a.m. at the Trinity Lutheran Church in Bruning, Nebraska. Pastor Stuart Sell officiated the service. Deb Pohlmann accompanied the congregation in the singing of “All Creatures Of Our God & King,” “How Great Thou Art,” “It Is Well With My Soul,” and “O Master, Let Me Walk With Thee.” Honorary Pallbearers for the service included Debbie Rowe, Gail Jacques, Lana Day, Jon Fredricks, Rick Fredricks, Tim Fredricks, Michelle Fredricks, Brad Davis, Brenda Davis, Heather Mohling, Nathan Fredricks, Jessina Lentfer, John Lentfer, Ashley Shaneyfelt, Drew Shaneyfelt, Austin Lentfer, and Rachel Lentfer. A private Committal Of Ashes was held in the Trinity Lutheran Cemetery following the Memorial Service. Farmer & Son Funeral Home was in care of the arrangements and online condolences can be left at www.farmerandsonfuneralhome.com. Memorials can be made in Patt’s name to the Fillmore County Foundation, PO Box 313, Geneva, Nebraska 68361.

Patty Ann was born to Virgil H. Fredricks and Mildred E. Yost Fredricks of Glenvil on November 26, 1949 in Hastings, Nebraska, the fourth of five children. She passed away on Friday, March 22, 2019 at Bryan West Hospital in Lincoln, at the age... View Obituary & Service Information

The family of Patty Ann Lentfer created this Life Tributes page to make it easy to share your memories.

Send flowers to the Lentfer family.