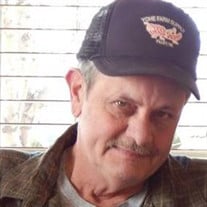 Funeral services 10:30 a.m., Monday, at the St. John's Lutheran Church in Ohiowa. Visitation Sunday, from 1 p.m. until 8 p.m. at the Farmer & Son Funeral Home in Geneva. Family greeting friend from 6 p.m. until 8 p.m.Burial in the Ohiowa Public Cemetery. Memorials in care of ther family in lieu of flowers. Paul Karl Thomas was born on July 13, 1960 in Omaha, NE. Paul was adopted as an infant by Melvin and Erma (Krisl) Thomas of Ohiowa. Paul was baptized and confirmed at St John’s Lutheran Church of Ohiowa, NE. He attended Ohiowa Public Schools, graduating in 1978. After graduation, Paul enjoyed farming with his dad. After Paul quit farming, he started trucking for the Ohiowa Coop, then for Noler trucking in Exeter. He eventually bought and operated his own trucking business, PT Trucking, serving people locally and in the Midwest. In August of 1985 he married Paula Greene and to them 3 children were born, Jason Lee, Megan Corine, and Curtis Karl. In his life he has belonged to several organizations including the Ohiowa Fire Department and Sons of the Legion. One of Paul’s passions when he was a young man was stock car racing. He loved taking his car to various tracks in the area. Paul had a love for anything with wheels and a motor, especially John Deere tractors and Ford trucks. He was also happy to go hunting and fishing with his dad. He passed on the love of the outdoors, hunting and fishing, to his own children. Camping was also an activity enjoyed as a family. Paul loved growing up, and living in Ohiowa. He truly enjoyed the small town atmosphere. Paul was a one of a kind person who really enjoyed being around people. He loved spending quality time with his and Barb’s grandchildren. He could often be found having drinks, socializing with friends. On the evening of September 4, 2014, Paul passed away peacefully, surrounded by family. He was 54 years old. Paul was preceded in death by his parents, Melvin & Erma Thomas & son, Jason Lee Thomas. Survivors include his daughter, Megan Thomas of Ohiowa, son, Curtis Thomas & special friend, Tracy Dubas of Ohiowa, grandson, Jake Thomas Tinsley & granddog Ed of Ohiowa, sister, Luann Matthies of Omaha, sister and brother-in-law Kaye and Alan Mussman of Alexandria, aunt, Elma Krisl of Colorado Springs, CO, nieces & great nieces. Special friend, Barb Jepsen, her two daughters & their 7 children

The family of Paul K. "PT" Thomas created this Life Tributes page to make it easy to share your memories.

Send flowers to the Thomas family.