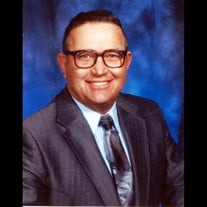 Percy Donald Aspegren, son of Melvin and Leona (Barker) Aspegren was born February 1, 1933 where his parent’s farmed in Saronville, Nebraska. He passed away on January 10, 2018 at Heritage Crossings in Geneva, Nebraska at the age of 84 years, 11 months and 9 days. Percy received his name from a favorite uncle of his mother’s, Percy Barker. He was baptized at the Saronville Methodist Church in 1933, later being confirmed at the Saronville Lutheran Church when he was 14 years old. At 5 years old, he started country school District #9, one mile east of Saronville and then he moved to Saronville Grade School at 10 years, later transferring to Sutton in the 6th grade. Percy graduated from Sutton High School in 1950. Quoted under his graduation picture, “his size would assure him a high place in the world”, which not only spoke of his stature but could also be said of his kind and generous heart. Some of his favorite high school memories were FFA, and particularly basketball. The coach convinced his parents to let him play his junior and senior year, as he needed the “big guy” to play center. One thing he was most proud of was going head-to-head against 3 all-state centers his senior year, and being able to “hold his own”. After graduation from high school, Percy was given the opportunity to do what he loved most - farming the land for his neighbor’s farm until he was inducted into the United States Army in June of 1953. He attended basic training at Fort Chaffee, Arkansas, transferring to Fort Sill, Oklahoma, before receiving his order to Hammelburg, Germany for the next 15 months. While stationed there, he was assigned to the 142nd Field Artillery Group, 631st Armored Field Artillery Battalion. Percy served as Corporal, operating as a sighter for the 155 Howitzer on maneuvers. In the summer of 1954, he and two other buddies went on Leave, enjoying his travels to most of the countries in Western Europe, including Paris. He was Honorably Discharged from the Army in April of 1955. Back in the fall of 1951, before heading into the Army, Percy noticed the cutest freshman baton twirler, Marie Ward, marching with the Geneva band. He knew immediately she was the one and wanted to meet her. Their mutual friends managed to bring them together and their favorite meeting place was at the roller skating rink. They were married on August 28, 1955 at the Geneva United Methodist Church. They were blessed with their children, Dan, Don, Chris and Karen and together made a good life in Geneva. One thing that was important for Percy was he was a man of his word and a handshake was his bond. He was tremendously generous and was always willing to give a helping hand to those in need. It made him happy to farm with his son, Dan and then his grandson Ryan. Percy’s favorite time of year was in the summer, when he would help his children prepare cattle for 4-H, showing at the Fillmore County and State Fair. Another special time was coaching peewee league and later managing the Geneva Junior & Senior Legion Baseball team for 9 years. In the fall, you could always see him heading to Lincoln to watch Husker football with Marie. As the years went along and they stayed closer to home, the sporting channel was always on. He was an avid sports fan, and he would often say “people would say I may have a sports addiction.” You could always see him and Marie being around family and friends, whether it was visiting his family in Colorado or here close to home. Being around his grandchildren and supporting their activities always brought a smile to his face. In the mornings you could find Percy and Marie sipping coffee at the local Senior Center, which was a special place for them to meet friends. Percy enjoyed volunteering his time and was a member of the Geneva Community Grange, Independent Order of Odd Fellows, American Legion Post #68, and a lifetime member of the Geneva VFW Post 7102. He was on the Geneva Township Board and also the Fillmore County Fair Board for many years. Welcoming Percy in heaven are his parents Melvin and Leona Aspegren, brothers Arnold and Byron, sister Joan and many other family and friends. Continuing life’s journey are his wife Marie, son and daughter-in-law Dan and Penny Aspegren, son and daughter–in-law Don and Laura Aspegren, daughter and son-in-law Christie and Doug Roth, daughter and son-in-law Karen Aspegren Baum and Garrett Baum, grand children Derek & Kendra, Ryan & Lindsey, Jeffrey & Kelsey Aspegren, Katie & Josh Stewart, Bethany & Ryan Jaques, Nick Roth, Julie & Jesse Sierks, Jordon and Alex Baum and eight loving great grand children. All who loved and knew Percy will miss him. A Funeral Service for Percy was held on Monday, January 15, 2018 at 10:30 a.m. at the United Methodist Church in Geneva. Pastor Michelle Gowin officiated the service. Sondra Myers accompanied the congregation in the singing of “In The Garden” and “Abide With Me.” The recorded selection “Hallelujah” was also played during the service. Pallbearers for the service included Derek Aspegren, Katie Stewart, Ryan Aspegren, Bethany Jaques, Jeffrey Aspegren, Nick Roth, Julie Sierks, Jordon Baum, and Alex Baum. Honorary Bearers included Brent & Abi Reinsch. Interment was held in the Geneva Public Cemetery following the Funeral Service with Military Rites performed by the Samuel J. Marsh Geneva VFW Post 7102 and the Nebraska Military Honor Guard. Farmer & Son Funeral Home conducted the services and online condolences can be left at www.farmerandsonfuneralhome.com. Memorials are suggested to the Geneva Legion Baseball Program.

Percy Donald Aspegren, son of Melvin and Leona (Barker) Aspegren was born February 1, 1933 where his parent&#8217;s farmed in Saronville, Nebraska. He passed away on January 10, 2018 at Heritage Crossings in Geneva, Nebraska at the age of 84... View Obituary & Service Information

The family of Percy D. Aspegren created this Life Tributes page to make it easy to share your memories.

Send flowers to the Aspegren family.