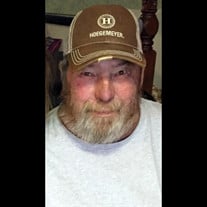 A Graveside Memorial Service will be held for Perry on Saturday, December 2, 2017 at 10:30 a.m. at the Ohiowa Public Cemetery. Kim Dunker will officiate the service. A Celebration of Life will be held at the Geneva VFW following the Graveside Service. Memorials are suggested to the Geneva Rescue Unit or the American Heart Association. Perry Alan Dittmer was born to Clifford C. Dittmer and Eleanora Gewecke Dittmer on May 17, 1954 in Hebron, Nebraska. He passed away November 22, 2017, at St. Elizabeth's Hospital in Lincoln, at the age of 63 years, 6 months, and 5 days. He was one of three children born in the family. He was baptized and confirmed in the Lutheran faith. He was a member of Prince of Peace Lutheran Church, Geneva. Perry attended Geneva Public School and graduated from Geneva Jr. Sr. High School in 1972, then attended the University of Nebraska-Lincoln. He returned home to join his father and brother in farming. In 1977, his father incorporated the family farms and hog operation with Perry and his brother, Steve. Perry resided there until his death. His life was centered around his family and friends. He was a very loving son, brother, and uncle. He was very proud of his nephews and nieces. He enjoyed the outdoors and country living. Farming brought him great pleasure. Perry's greatest interest in life was following sports and the worldly news. The Nebraska Cornhuskers were his favorite team. Many years Perry attended Nebraska football games with his best friend, John. In his early years, he enjoyed traveling to Nebraska Bowl games with his high school friends. He also looked forward to spring, cattle branding in the western Sandhills, with his college friends. Perry also would host hunting parties in the fall with those same friends. Perry had pleasure teaching his young nephews Nick, Cole, and Jared farm life. Later in life, traveling to California to visit his sister, Kim, nieces Krissy and Katie, and all the attractions California had to offer was one of his favorite past times. Teasing his sister in law, Cindy, and her daughters, Jessica and Stacy also put a smile on his face. Perry's favorite past time was using his cell phone. Family and friends closest to him, especially, Barry, would hear from him often to chat about farming, the weather, sports, etc. Perry's most important accomplishment was providing comfort and care for Mom. Perry was dedicated to taking care of Mom and seeing to her everyday needs. Perry was preceded in death by his father, Clifford Dittmer. He is survived by his mother, Eleanora of rural Ohiowa, brother, Steve and wife Cindy of Bruning, and sister, Kim Keen of Modesto, California, nephews Nicholas Dittmer of Bennet, Cole Dittmer of Lincoln, Jared Dittmer of West Point, nieces Kristin Keen of NYC, Katie Keen Bartholomew of Fort Myers, Florida, Jessica McGowan of McCool, and Stacy Moormeier of Roca, and grand nephews and nieces. One aunt, Mable Muehling of Omaha, and many cousins and friends.

A Graveside Memorial Service will be held for Perry on Saturday, December 2, 2017 at 10:30 a.m. at the Ohiowa Public Cemetery. Kim Dunker will officiate the service. A Celebration of Life will be held at the Geneva VFW following the... View Obituary & Service Information

The family of Perry A. Dittmer created this Life Tributes page to make it easy to share your memories.

A Graveside Memorial Service will be held for Perry on Saturday,...