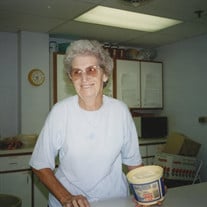 Funeral services for Phyllis will be held on Tuesday, February 3, 2015 at 10:30 AM at First Congregational United Church of Christ with Pastor Diane Ryder officiating. Visitation will be begin on Monday, February 2, 2015 at 1:00 PM until 8:00 PM at Farmer & Son Funeral Home in Geneva, NE. Graveside services will be held in the Geneva Public Cemetery. Memorials are to be directed to the family for a later designation. Phyllis Jean Engle was born to Anton E. Kotas and Gertrude (Deaver) Kotas on December 20, 1925 at the family farm near Tobias, NE, and passed away January 29, 2015 at Heritage Crossings in Geneva, NE, at the age of 89 years, 1 month and 9 days. She was one of four children in the family. Phyllis was born and raised on the family farm near Tobias, NE, and was baptized in the Catholic Faith as a child. She attended the Lone Star Country School through the 8th grade and graduated from Milligan High School in 1943. After high school she was employed at the Fairmont State Airbase. Phyllis was united in marriage to George A. Engle of Geneva on April 25, 1946 and resided on a farm northeast of Geneva. After Phyllis married George, she joined the First Congregational Church. They had three children, Diane, George “Jr.” and Barbara. Phyllis was a quiet spoken lady and always found the good in everyone. She was a good cook, baker, and seamstress and loved her large garden. George and Phyllis purchased the First Congregational Church parsonage on August 1, 1974 and together with Diane they moved in to town in December 1974. After moving to town Phyllis and Diane would drive to the country to raise baby chicks and a large garden. She enjoyed dancing to Czech music. You could usually find George and Phyllis every Sunday at Pla-Mor Ballroom dancing the night away. While they were at Pla-Mor they ended up making many dancing friends. Phyllis served her church in many capacities; as a member of the Women’s Fellowship, she served as the President for several years. During holiday season she was more than willing to help with Thanksgiving Dinner the church put together. She was always willing to help the ladies of the church put together a meal for the family and congregation of a fellow member who had passed away. She was also a member of the Geneva Legion Auxiliary Post #68. A favorite saying to her kids and one they will always remember was, “Two wrongs never makes it right”. She was preceded in death by her parents, brother, Donald Kotas; brothers-in-law, Francis “Fritz” Greenlee, Frank, Harold and Willis Engle; sisters-in-laws, Anna Vnoucek, Helen and Beth Engle; niece, Debbie Wiltshire; nephews, Herald Brian Wiltshire, Lawrence Engle and great-niece, Kristin Engle. Phyllis is survived by her husband, George A. of Geneva; son, George Jr. and wife Susan of Geneva; daughters, Diane Engle of Geneva, Barbara Trapp and husband Tom of Geneva; sisters, Delmary Wiltshire of Lincoln, Faye Greenlee of York; sisters-in-law, Eleanor (Arlan) Becker of Exeter, Ruth (Delbert) Sorge of Geneva, Mary (Ronald) Uldrich of Milligan; brother-in-law, Joe A. Vnoucek of Friend; grandchildren, Loren Stephenson of Fairmont, Teresa (Herman) Rodriguez of Pecos, NM, James (Jean) Engle of Geneva, Rueben (Lisa) Engle of Clive, IA, Crystal Engle of York; 5 grandchildren and 5 great-grandchildren and lots of nieces, nephews and friends.

Funeral services for Phyllis will be held on Tuesday, February 3, 2015 at 10:30 AM at First Congregational United Church of Christ with Pastor Diane Ryder officiating. Visitation will be begin on Monday, February 2, 2015 at 1:00 PM until... View Obituary & Service Information

The family of Phyllis J. Engle created this Life Tributes page to make it easy to share your memories.

Funeral services for Phyllis will be held on Tuesday, February...

Send flowers to the Engle family.