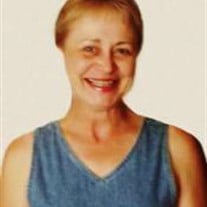 Funeral services for Naidene will be held on Thursday, March 1, 2012 at 10:30 a.m. at the St. Joseph's Catholic Church in Geneva with Father Tom Walsh officiating. Graveside services will follow the Funeral at 2:00 p.m. at the Miltonvale Cemetery in Miltonvale, Kansas. Visitation for Naidene will be on Wednesday from 1:00 p.m. to 8:00 p.m. with family to greet friends from 5-7 p.m. at the funeral home. Memorials are directed to the Web Whispers Organization. (www.webwhispers.org) Phyllis “Naidene” Shroyer was born to Ronald W. and Rachel N. Cassel Bell-Hudson on September 2, 1958, at Salina, Kansas. She passed away February 24, 2012, at the Fillmore County Hospital in Geneva, Nebraska, at the age of 53 years, 5 months and 22 days. She was one of three children in the family. Naidene attended and graduated in 1976 from Minneapolis High School in Minneapolis, Kansas. She then worked at the Minneapolis Clinic as a Dental Assistant. She then attended Southeast Community College in Beatrice, graduating in 1993 with honors. While attending college she worked as a CNA at the Fillmore County Hospital and then as a licensed LPN for nearly twenty years. Naidene was married to Robert J. Shroyer of Miltonvale, Kansas on February 14, 1976 and to them four children were born. She was a member of St. Joseph’s Catholic Church in Geneva. She had an affinity for animals and loved horses and dogs. Her leisure time was spent doing cross-stitch sewing and lovingly making 23 western shirts for Christmas gifts in one year. She also enjoyed working with and on the computer. Preceding her in death were her father, Ronald W. Bell, infant brother, Robert and her grandparents. Naidene is survived by her husband, Robert J. Shroyer of Geneva, NE; her mother, Rachel Cassel Bell-Hudson of Minneapolis, KS; brother, Terry A. Bell and Marsha of Salina, KS; children, Sheri Shroyer of Chantilly, VA., Myra Martin of Klondike, TX., Shana and Kevin Nelson of Grovetown, GA. and Luke Shroyer of Blair, NE. Also surviving are five grandchildren.

Funeral services for Naidene will be held on Thursday, March 1, 2012 at 10:30 a.m. at the St. Joseph's Catholic Church in Geneva with Father Tom Walsh officiating. Graveside services will follow the Funeral at 2:00 p.m. at the Miltonvale Cemetery... View Obituary & Service Information

The family of Phyllis "Naidene" Shroyer created this Life Tributes page to make it easy to share your memories.

Funeral services for Naidene will be held on Thursday, March...

Send flowers to the Shroyer family.