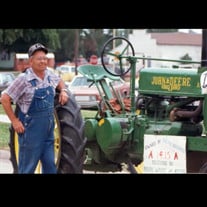 Ralph Eugene Broman, age 92, passed away Sunday, December 13, 2020 at Heritage Crossing in Geneva, Nebraska. He was born on a farm East of Fairmont, Nebraska to Lloyd and Gladys (Jacobsen) Broman on May 21, 1928. Ralph was the youngest of four children having two sisters, and a brother who died as an infant. He always said they had a good home, but he did have to help out on the farm a lot of the time. There were chores to do, including feeding cobs to the hogs, cleaning out the pens, and milking the cows twice a day. After he got the cows milked, Ralph went to Country School, walking a mile and a quarter each morning. He really did not like school and says that “studying was out of the question!” After graduating from Fairmont High School in 1945, he held several jobs, including continuing to help his dad on the farm. He went to York where he worked in a tire shop part time and worked with construction when they resurfaced Highway #81. He was also the town cop in Fairmont for a time. His favorite employment was with Green Country where he served over 35 years of hard work and a loving passion for John Deere. Ralph was married for a short time to Joan Valentine and to that marriage one son and two daughters were born: Marilyn, Ken, and Jeanette. The family was separated for quite a few years, and Ralph and Lora were very happy when they were able to meet and develop a very close relationship with them again. Ralph met Lora (Behmerwohld) when she was working in the nursing home in Fairmont, Nebraska. They were married on July 27, 1963, and he adopted Roxie in 1964. After that, two sons were born to them: Wayne and Keith. The family moved to Geneva to a house that Ralph moved in and remodeled for his family. Ralph and Lora both shared a love for horses, trail-rides, camping, bus tours, and taking their grandchildren camping and fishing at near-by rivers and lakes. Many of the memories of him show how big hearted he was and his enjoyment in harassing and pranking others. For instance, he loved to hide his dentures from the nurses at the nursing home and family to always find them in his mouth with a big grin on his face to accompany it. He was a man of character, principals, humility, and love, never jeopardizing his morality or integrity. The proof that continues in his children, family members, loved ones, and those he influenced. He taught everyone he touched how to be proud of what was accomplished for the day, how to be true, and how to respect others who respect you. During these times of grieving it is comforting to know that he is once again with his wife in heaven, where the door is never locked and always open just like the way he lived his life. Those who remain to cherish his memory are six children: Marilyn McRee, Ken Broman (Gayle), Jeanette Lutton, Roxie Broman, Wayne Broman (Linda) and Keith Broman (Cheryl); Fourteen grandchildren: Gregory, Christine, Jessica, Sarah, Kevin, Matthew (Nicole), Shana (Matt), Alexandra, Kyla, Kristin (Matt), Heather (Tyce), Jamey, Kyle, and Jordan; Fifteen great grandchildren: Hailee, Alyssa, Conner, Emma, Hadley, Avalyn, Macie, Coen, Sara, Kate, Tyler, Justin, Chelsea, Daishaun, Isabella, and Noah; Four step great grandchildren: Kaitlyn, Grayce, Mackenson, and Kenny. He was preceded in death by his parents Lloyd and Alberta “Gladys” Broman, wife Lora Broman, sisters Helen (Glen) VanAndel and Virginia (Lambert) Hopken, brother who passed as an infant, brother and sister-in-law’s Gary Behmerwohld and William and Dora Caudy, great grandson Jared, and son-in-law Bill McRee. A Funeral Service for Ralph was held on Thursday, December 17, 2020 at 10:00 a.m. at the 1st Congregational United Church Of Christ in Geneva. Pastors Stuart Davis and Jeff Jensen officiated the service. The recorded selections “Even Though I’m Leaving,” “He Walked On Water,” “The Ride,” and “The Dance” were played during the service. Pallbearers for the Funeral Service included Jason Tatro, Jeff Whitley, John Westfall, Jack Yoder, Brian Krenke, and Ralph Graham. Interment was held in the McCool Cemetery following the Funeral Service. Farmer & Son Funeral Home was in care of the arrangements and online condolences can be left at www.farmerandsonfuneralhome.com Memorials are suggested to the Geneva Fire Department and Geneva Rescue Squad.

Ralph Eugene Broman, age 92, passed away Sunday, December 13, 2020 at Heritage Crossing in Geneva, Nebraska. He was born on a farm East of Fairmont, Nebraska to Lloyd and Gladys (Jacobsen) Broman on May 21, 1928. Ralph was the youngest of... View Obituary & Service Information

The family of Ralph E. Broman created this Life Tributes page to make it easy to share your memories.

Send flowers to the Broman family.