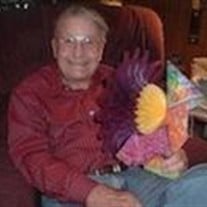 Ralph Leo Gipson was born to Forest Roscoe Gipson and Leona May Summerfield Gipson on November 22, 1922, in Huntsville, Missouri, and passed away April 3, 2013, at home in Fairmont, Nebraska, at the age of 90. He was one of six children. Ralph graduated from high school in Huntsville in 1941. He served our country as a sailor in the United States Navy during World War II, where he was stationed on the USS Richmond. In 1942, he met Cora Louise Holder, of Lincoln, Arkansas, and the couple married in Seattle, Washington on Christmas day 1943. To them, two daughters were born. After the war the family moved to York, Nebraska where Ralph began working for Consumer Public Power (NPPD). The family lived in several communities in the York area including Exeter, Clay Center and Geneva. Following his retirement from NPPD in 1982 Ralph worked several years for University of Nebraska Research Center in Clay Center. Ralph and Louise moved to Fairmont in 1982. Ralph was very active in his community, he was a member of the Fairmont United Methodist Church, the Geneva VFW, the Fairmont American Legion, and he played an instrumental role in establishing a local chapter of Compassionate Friends. He was also a member of the Lion’s Club, served on the Parish Relations Committee in Geneva, and led a local youth group in Exeter. His retirement years were spent traveling with their daughter Linda and son-in-law. They spent many winters in Texas and Arizona. Ralph also enjoyed attending his annual naval ship reunions. Ralph was a jack of all trades, he could fix anything that needed fixing, but he also enjoyed tinkering and building things. Most of all, Ralph loved spending time with his family. One of his greatest passions was spending summers at Lovewell Lake, where the family had a cabin. He loved to be on the water, and he prided himself in teaching everyone he knew how to water ski. He was very proud of the fact that he could still water ski past his 80th birthday. He never missed out on being there for his grandchildren. There was never a baseball game or a school activity where he wasn’t in attendance. In November, Ralph celebrated his 90th birthday with family and friends. On Christmas Day he and Louise celebrated 69 years of marriage. Ralph is preceded in death by his parents, a sister, Gerlee Reynolds, a brother, Howard Gipson, and a daughter, Lois Leona Gipson Swails. Survivors include his wife Louise of Fairmont, NE, daughter Linda McQuinney, and husband Richard of Post Falls, ID, grandchildren Desire McNabb and husband Dane of Plaines, MT, Kelly Green and husband Rob of Libby, MT, Darcy Moul and husband Darcy of Grand Island, NE, Daryn Swails and wife Kim of Kearney, NE, and Deidre Voigt and husband Terry of Post Falls, ID. Also left to cherish his memory are 16 great grand children, and 4 great-great grand children. Memorial services for Ralph will be held on Saturday, April 6, 2013 at 11:00 a.m. at the Fairmont Community Church in Fairmont, Nebraska. Pastor Karla Sheffy will be officiating the service. There will be a private family committal of ashes in the Fairmont Public Cemetery.

Ralph Leo Gipson was born to Forest Roscoe Gipson and Leona May Summerfield Gipson on November 22, 1922, in Huntsville, Missouri, and passed away April 3, 2013, at home in Fairmont, Nebraska, at the age of 90. He was one of six children.... View Obituary & Service Information

The family of Ralph L. Gipson created this Life Tributes page to make it easy to share your memories.

Ralph Leo Gipson was born to Forest Roscoe Gipson and Leona May...

Send flowers to the Gipson family.