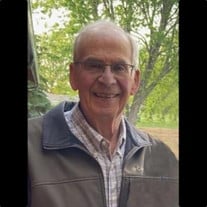 A Funeral Service for Butch will be held on Thursday, February 10, 2022 at 10:00 a.m. at the First Congregational United Church of Christ in Exeter, Nebraska. Pastor Stuart Davis will preside over the Funeral Service. A Graveside Service with Military Honors will be held in the Exeter Cemetery following the Funeral Service. Public Visitation will take place on Wednesday, February 9, 2022 from 1:00 p.m. to 8:00 p.m with Family greeting friends from 5:00 p.m. to 7:00 p.m. at Farmer Funeral Home in Exeter, Nebraska. In lieu of flowers, memorials are suggested to the family to be designated at a later date. Butch's Funeral Service will be live-streamed to Farmer & Son Funeral Home's Facebook page. Our public Facebook page can be found by searching '@friendlyfuneraldirectors' or by clicking on the livestream picture link under 'photos & videos' on Butch's page on our website. Ralph “Butch” Eugene Jansen of Exeter, NE, was born in Geneva, NE, on August 27, 1946, to Ardis and Rudolph Jansen and passed away February 6, 2022 at the age of 75. He grew up on a farm just west of town and attended Exeter Public School. He graduated in 1964 and then went to the University of Nebraska Lincoln for 2½ years before getting drafted. Butch served his country full and part-time until 1973. On June 13, 1970, he married the love of his life, Barbara Ethington. To this union, two daughters were born, Kristen and Erin. In 1972 Butch and Barb moved to the family farmstead north of Exeter. There he farmed until he transitioned to a rural mail carrier. Butch loved his family. He was known for his one-liners, his kindness, & quiet demeanor. He looked so forward to his family time, whether it be around the dinner table, at the grandkid’s activities, watching the Huskers, phone calls, and stopping for breakfast any time of the day. He was a man of few words–they would either marinate into your soul or allow you to giggle for hours after. Butch donated his time and service to others throughout his life. He served the Exeter School Board, Quad County Coop Board, and Exeter Rural Fire Board. He was also a previous Commander and member of the Legion Post 218, Commander of the Legion Color Guard, and the Fillmore Veterans’ Advisory Council. Additionally, he served in many capacities at the UCC Church. Preceding him in death were his parents, Ardis and Rudolph Jansen; brothers-in-law Rol Stock, Ron Davis & Jerry Krause; sister in law, Jean Stock; and nephew Marc Krause. He is survived by his wife, Barbara Jansen of Exeter; Daughter Kristen Jansen-Ruhl and Ryan Ruhl children Payton, Tyler, and Jakob of Cairo, Nebraska; Daughter Erin Jansen and daughter Aliya Awadey of Denver, Colorado; sister Shirley Krause of Geneva, Nebraska; sister Colleen Davis of Hastings, Nebraska; Sister-in-law and Brother-in-law Carol and Larry Starr of Crete, Nebraska plus many nieces, nephews, cousins, and friends.

A Funeral Service for Butch will be held on Thursday, February 10, 2022 at 10:00 a.m. at the First Congregational United Church of Christ in Exeter, Nebraska. Pastor Stuart Davis will preside over the Funeral Service. A Graveside Service... View Obituary & Service Information

The family of Ralph "Butch" Jansen created this Life Tributes page to make it easy to share your memories.

A Funeral Service for Butch will be held on Thursday, February...

Send flowers to the Jansen family.