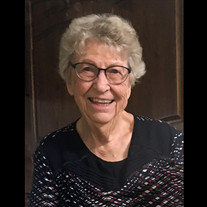 Ramona J. Watmore was born to William & Lois (Rakestraw) Hlina on July 21, 1929, at Fairmont, Nebraska, and passed away on August 21, 2019 at Litzenberg Memorial Long Term Care in Central City, Nebraska at the age of 90 years and 1 month. She was one of 3 children born in the family. Ramona’s early childhood was spent on farms near Burress and Geneva. She attended grade school at rural school district’s #68 and #3. She graduated from Geneva High School with the class of 1946. During her high school years, she stayed with her grandparents, Roy & Zella Rakestraw, and worked at the Lynn Grocery Store. After graduation, Ramona taught at rural school district #81 for one year and rural school district #3 for two years. Ramona was united in marriage to William R. Watmore on June 30, 1948 and three children were born to the union: Mike, Kathy and Mark. The family moved to the farm east of Geneva in 1950 and resided there until 1996 when they moved into Geneva. Ramona loved living and raising her family on the farm. She also liked raising a large produce and flower garden. Once the kids were grown, she worked in the Fillmore County Assessor’s office from 1973-1974 and then she worked part time for the Fillmore County Clerk’s Office for many years. Ramona was raised in the United Brethren and Methodist Churches. She joined the First Congregational United Church Of Christ in 1948 serving on the Church Circle and various other church boards. She was also a Charter Member of the Geneva Grange #403, Hidden Hills Country Club, and was a member of the Chelsea Women’s Club for over 50 years. She served as secretary for the FCE County Board for many years and was a member of the Rebekah Lodge. In her spare time, Ramona enjoyed belonging to several bridge clubs, a pinochle club, golfing, reading, crocheting and serving as a Cub Scout Den Mother and 4-H leader. She also thoroughly enjoyed her yearly family vacations and all-girl shopping sprees. Ramona was preceded in death by her parents, William & Lois Hlina; husband William Watmore; sister Patsy Dodson. She is survived by her children Mike Watmore & wife Sandy of Denton, Nebraska, Kathy Bowman & husband Mike of Central City, Nebraska, and Mark Watmore & wife Terry of Warren, Michigan; sister Sharon Wallis of Montgomery, Alabama; and grandchildren Lauren Watmore, Joseph Bowman, Jessica Comben, Steven Watmore and Sean Watmore; and great-grandson, Ben Comben. A Memorial Service for Ramona was held on Tuesday, August 27, 2019 at 10:00 a.m. at the First Congregational United Church of Christ in Geneva. Pastor Stuart Davis officiated the service. Nancy Cradduck provided the prelude and postlude music. The recorded selections “The Garden,” “Jealous Of The Angels,” “Supermarket Flowers,” and “When I Get Where I’m Going” were played during the service. Honorary Pallbearers were Jessica Comben, Steven Watmore, Joseph Bowman, Sean Watmore, Lauren Watmore, and Benjamin Comben. Inurnment was held in the Geneva Public Cemetery. Farmer & Son Funeral Home was in care of the arrangements and online condolences can be left at www.farmerandsonfuneralhome.com. Memorials are suggested to the Nebraska Children’s Home Society of Omaha, 4939 South 118th Street, Omaha, NE 68137 or the Geneva Rescue Unit.

Ramona J. Watmore was born to William & Lois (Rakestraw) Hlina on July 21, 1929, at Fairmont, Nebraska, and passed away on August 21, 2019 at Litzenberg Memorial Long Term Care in Central City, Nebraska at the age of 90 years and 1 month. She... View Obituary & Service Information

The family of Ramona Watmore created this Life Tributes page to make it easy to share your memories.

Send flowers to the Watmore family.