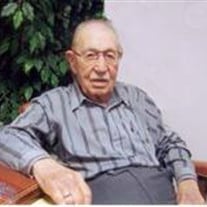 Funeral services for Ray will be held on Tuesday, December 24, 2013 at 10:30 a.m. at the St. Joseph Catholic Church in Geneva. Military graveside services will follow the funeral in the Geneva Public Cemetery. Visitation will be held on Monday from 1:00 p.m. to 8:00 p.m. at the Farmer & Son Funeral Home in Geneva. Memorials in lieu of flowers will be designated at a later date. Raymond L. Cellar was born on January 4, 1917 in Geneva, Nebraska to Henry Rankin Cellar and Mildred Leigh (Johnston) Cellar. After a long and happy life, Ray left us on Friday, December 20, 2013 in his hometown, Geneva, Nebraska at the age of 96 years, 11 months, and 16 days. Ray attended grade school in Geneva and attended high school in Lincoln when his family moved with his father’s lifelong work-grain elevators. With the family’s move to St. Joseph, Missouri, he graduated from Western Missouri College. In 1940 he graduated from the University of Missouri law school in Columbia. That same year he was admitted to the Missouri Bar Association. Ray entered the US Army in 1943, serving with the Combat Engineers. He was honorably discharged in 1946, having served in the European Theater, serving as Master Sergeant and then as Chief Warrant Officer. He was awarded the Bronze Star Medal for his efforts in World War II. Ray was married to Helen Elizabeth Morgan on September 11, 1943 in Richmond, Missouri. Helen passed away in Hebron on 1959. He then married Helen Hampton in Geneva on June 13, 1964. Ray was admitted to the Nebraska Bar Association in 1949, after moving back to his birthplace and hometown, Geneva. Ray practiced law in Geneva until 1957, when he was elected Fillmore County Judge. In 1972, he was elected District County Judge of Nebraska’s 7th Judicial District, serving the counties of Fillmore, Thayer, Saline, and Nuckolls. Ray retired on his birthday, January 4, 1989. He enjoyed playing tennis in Jr. College and he enjoyed golf. He also enjoyed following his sons’ golf outings in both high school and through their college years. He was also an avid Kansas City Royals fan, having attended many games. Ray belonged to the Geneva Lions Club, Samuel J. Marsh Geneva VFW Post 7102, the Sloan Bolton Geneva American Legion Post 68, and the Nebraska Bar Association. In retirement, Ray and Helen enjoyed many memorable coast to coast bus tours as well as family vacations throughout the years. He also enjoyed being a regular at the “9 0’clock coffee group” at Jill’s Sweet Shop. A highlight of Ray’s life was when he was able to be a part of the honor flight that flew to Washington D.C. to visit the World War II memorial in July of 2008. Ray was preceded in death by his parents; first wife Helen Morgan; and brother Robert and wife Dorothy Cellar, brother Dick and wife Shirley Cellar and nephew Brian Cellar. He is survived by his wife of 49 years Helen of Geneva, Nebraska; two daughters Pamela Roth of Loup City, Nebraska and Paula Cellar of Lake Worth, Florida; three sons Russell Cellar of Geneva, Nebraska, Curtis Cellar and wife Richelle of Grand Island, Nebraska, Michael Cellar and wife Kristina of Wichita, Nebraska; 7 grandchildren Lara, Amy, Robert, Emily, Thomas, Kaylee, and Paige; 7 great granddaughters Taylor, Zoe, Jinger, Jennifer, Harmony, Sami, and Matti. He is also survived by nieces and nephews; and sister-in-law Kathryn Christiancy. Ray enjoyed a long and enjoyable life among his many family, friends, and colleagues.

Funeral services for Ray will be held on Tuesday, December 24, 2013 at 10:30 a.m. at the St. Joseph Catholic Church in Geneva. Military graveside services will follow the funeral in the Geneva Public Cemetery. Visitation will... View Obituary & Service Information

The family of Ray L. Cellar created this Life Tributes page to make it easy to share your memories.

Funeral services for Ray will be held on Tuesday, December 24,...

Send flowers to the Cellar family.