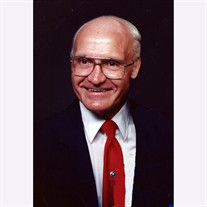 Raymond Dockter, son of August and Edna (Ochsner) Dockter, was born in Arena, North Dakota, on January 10, 1924, and passed away on December 11, 2014, at his home in Westminster, Colorado, at the age of 90 years, 11 months, and 1 day. Raymond lived with his parents, brothers, and sisters in Grafton, Nebraska, and graduated from Geneva High School with the class of 1942. Raymond served his country from 1943 to 1946 in the United States Army. He was in the anti-aircraft division and later in the 749th Field Artillery Battalion where he was in charge of 8-inch Howitzer guns in the battle of Okinawa in the Pacific. After the war, he was on an L&T boat escorting prisoners from Korea to Japan. Raymond was discharged from the Army at Ft. Logan, Colorado, in March of 1946. He had obtained the rank of Staff Sergeant. Throughout his life, he was proud to have served his country and had little tolerance for “patriots” and other anti-government groups or for those who didn’t honor the American flag. Ray always felt loyal to the office of the president, regardless of which party was in power. Raymond married Lois Moor of Exeter on June 2, 1950, in York, Nebraska. They had three sons, Jim, Scott, Mark, and a daughter Pam. The family moved from Hastings to Colorado in 1956, spending all but one year in Westminster, Colorado. Raymond retired as a mechanic after 43 years. He continued to work on cars at home as a means of keeping busy and always tried to be available to help his children and grandchildren with any car problems. When the family was young, the kids always thought their dad could fix anything, even when it was something completely unfixable. Raymond was a devoted husband and father. Although he didn’t display emotion very often, the family always knew he was there for them and that he would help with whatever was needed. One of his greatest virtues was his strong work ethic, always believing in hard work and keeping busy no matter how he felt. This resulted in all the children following his example and becoming adults who worked hard in their own careers. The oldest son has said he can only remember one time when his dad left work early. It took a car to fall off a jack and on his arm for that to happen! Raymond was a member of the Westminster Elks Lodge 2227 and the Arvada American Legion Post 161. Raymond was preceded in death by his loving wife, Lois Ann Dockter; his parents; three brothers Benjamin, Edward and Marvin Dockter; and two sisters Erna Ribeiro and Esther Emerson. He is survived by his children Jim & Bobbie Dockter of Westminster, Colorado; Scott & Sylvia Dockter of Arvada, Colorado; Mark & Zina Dockter of Brighton, Colorado; Pam & Greg Forsyth of Thornton, Colorado; brother Elmer Dockter of Geneva, Nebraska; eight grandchildren, ten great-grandchildren, and two great-great-grandchildren; nieces, nephews, and cousins. Funeral services for Raymond were held on Friday, December 19, 2014 at 11:00 a.m. at the United Church of Christ in Exeter, Nebraska. Pastor Kenneth Leischner officiated the services. The recorded selections “Music Box Dancer,” “America,” “Highwayman,” “Go Rest High On That Mountain,” and “In The Garden” were played during the service. Pallbearers for the service included Corey Forsyth, Eliah Forsyth, Ross Dockter, Tom Dockter, Adam Dockter, and Brandon Dockter. Honorary bearers included Brian Moor and Kurt Oates. Graveside services were held in the Exeter Cemetery with Military Rites performed by the William Sullivan Exeter American Legion Post 218. Farmer Funeral Home conducted the services. Memorials are directed to the American Legion in Exeter.

The family of Raymond Dockter created this Life Tributes page to make it easy to share your memories.

Raymond Dockter, son of August and Edna (Ochsner) Dockter, was...

Send flowers to the Dockter family.