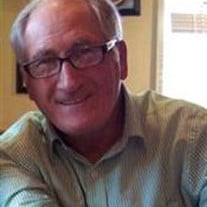 Rene Orville Molthan was born to Orville and Edna Molthan on December 20, 1949 in Hastings, NE. After battling cancer for seven years, he died peacefully in his home in Bruning, NE, surrounded by friends and family on January 21, 2012. Rene grew up in Bruning, NE and moved to Davenport in 1966 to live with his Grandma and Grandpa Whitmore. He graduated from Davenport High School in 1968. It was there that he met the love of his life, Virginia Kay (Jill) Pearson. Rene and Jill were married on January 25, 1969 (eventually celebrating 43 years of marriage). Rene went to Kearney State College where he graduated with a bachelor of science degree in business education in 1972. He went on to teach business at Pine Bluffs High School in Wyoming. Rene returned to Nebraska to be closer to family, living in Geneva, Davenport and eventually settling in Bruning. Rene worked at Reinke Mfg. in the shipping department and in quality assurance until he retired in 2010. Rene was baptized, confirmed and continued a long and faithful membership with the church.   Rene enjoyed working with his hands and spent a lot of time wood working. He was inventive and always had many projects going.  Rene was a spirited prankster with a great sense of humor who enjoyed making people laugh. He was a lover of the outdoors, enjoying camping, fishing and many other activities. In addition, he was a skilled drummer, and member of bands such as Western Wonders, Ambush, Blue River Revue, and Justified. Rene is preceded in death by his father Orville and brother Warren. He is survived by his wife, Jill, daughter Cassidy (Chuck) Hoffschneider of Fremont, NE, daughter Carrie (Todd) Cernin of Leshara, NE, and by daughter Cholly Molthan and fiance Matt Partridge of Columbus, OH; three grandchildren, Hannah, Morgan, and Evan Hoffschneider; mother Edna Molthan, siblings Larry (Marilyn) Molthan, and Debra Molthan. Rene also leaves behind many additional family members and wonderful friends who have supported and cared for him during his illness. Rene never lost his ability to laugh and smile and continued to show his love for family, friends, music, and cars until the end.  Services for Rene will be Wednesday, January 25, 2012 at 10:30 a.m. at the Trinity Lutheran Church in Bruning, Nebraska. Interment will be in the Bruning Public Cemetery. Visitation will begin Tuesday at 1:00 p.m. until 8:00 p.m. at the Farmer & Son Funeral Home in Geneva, Nebraska. Memorials are directed to the family for later designation.

Rene Orville Molthan was born to Orville and Edna Molthan on December 20, 1949 in Hastings, NE. After battling cancer for seven years, he died peacefully in his home in Bruning, NE, surrounded by friends and family on January 21, 2012.... View Obituary & Service Information

The family of Rene O. Molthan created this Life Tributes page to make it easy to share your memories.

Rene Orville Molthan was born to Orville and Edna Molthan on...

Send flowers to the Molthan family.