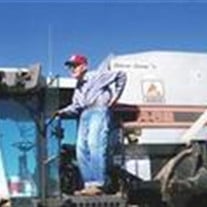 Funeral services will be held 11 :00 a.m., Wednesday, January 22, 2014 at the Farmer Funeral Home in Exeter, NE. Visitation from 1 p.m. until 8 p.m., Tuesday, at the Farmer Funeral Home with family greeting friends from 6 p.m. until 8 p.m. Graveside services will be 2 p.m. also Wednesday, at the Riverside Cemetery at Crete, NE. Memorials are in care of the family in lieu of flowers. Rex Bulwan was born at Lincoln General Hospital, Lincoln, Nebraska to John and Esther (Barney) Bulwan on April 17, 1927. He died January 19 at the Exeter Care Center. He will be buried at the Riverside Cemetary at Crete on January 22, 2014. He was baptized at the Friend Congregational Church, Friend, Nebraska. Rex began his education at School District 100, where he rode a pony two miles to and from school. When Rex was five years old he started to help with the milking. At ten years old he could drive his own team of horses and started picking corn with his dad. Rex attended Friend High School, where he lettered each year in Baseball and Basketball. He graduated from Friend High School on May 5, 1944. Rex was ordered to report to Fort Leavenworth, Kansas in June 1944 for the induction physical. He entered the U.S. Army on March 15, 1946. He had basic training at Fort Bliss, Texas in the M1 Rifle and 40 MM anti aircraft gun. After completing basic training, Rex was assigned to 611th FA-BA. P.K. 5th Army at Camp Carson, Colorado Springs, Colorado. He advanced to the rank of Corporal and spent the last four months of his Army career working in the stables and caring for the horses. Rex was honorably discharged on March 16, 1947. Upon returning to the Friend area, Rex farmed with his dad. They also farmed his brother Paul’s farm ground while Paul was serving in the Army overseas. Rex met the love of his life Arlene Bartos from California at a dance. They were married on March 17th, 1955 in Friend at the Congregational Church. Kathy (Rohrig) Ricenbaw was flower girl. Rex and Arlene lived on the Chab farm south of Friend. In 1962 they moved to a farm near Exeter. Together they farmed and fed cattle. They both enjoyed working with livestock and their pets. Arlene died in 1992. Rex enjoyed many happy times with his family. One includes a 2007 trip to Florida. He wanted to see the homes and work of the Motis boys. They all had worked for him on the farm when they were 14 to 16 years old. On April 17 , 2007, in celebration of his 80th birthday, Rex hosted a dinner party for relatives, friends and Arlene’s club at the Friend Country Club. Rex is survived by his three sisters and in laws, Marilyn and Allan Rohrig, Friend, Ruth and Ed Motis, Lake Wales, FL, Clarice and Rich Bohn of Omaha and a sister in-law Dolores Bulwan, York and many nieces and nephews.

The family of Rex E. Bulwan created this Life Tributes page to make it easy to share your memories.

Send flowers to the Bulwan family.