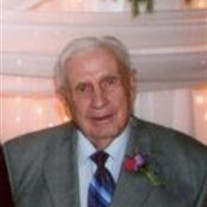 Rex L. Jurgensen passed away on Saturday, January 21, 2012 at Annie Jeffrey Memorial County Health Center in Osceola, NE at the age of 89 years, 4 months and 13 days.  He was born in Cordova on September 8, 1922, the second child of Fred and Marie (Larsen) Jurgensen.  He was baptized and confirmed at St. John’s Danish Lutheran Church in Cordova.  Rex graduated from Cordova High School in 1940.  He left home to attend radio school in Chicago, returning to work at the KGRI radio station in Grand Island.  In 1943 he joined the army and was stationed in Salt Lake City, Utah where he studied engineering before being shipped to Germany to join the allied forces in WWII.   While stationed in California, Rex married Betty L. Plettner of Exeter on September 19, 1945.  When the war ended they returned home and eventually took over the family farm.   Rex was a farmer by choice but took time to enjoy many activities including family trips, hunting, fishing, bowling and especially golf.  In his younger years he played baseball for the Cordova area team and he continued to be a baseball fan his entire life.  Active in church and community he held positions on the church board and the Co-op. He was a member of the volunteer fire department, a Boy Scout leader, and for 66 years a member of the Cordova American Legion. In the early 60s he joined a group that initiated the paving of the Cordova road to the interstate (and was pleased to live to see it finally happen!)  He and Betty retired and built a house in Cordova before deciding that south was good. After some years of being snowbirds they made Texas their home. Their last Texas residence was in Alamo, Texas where the house was conveniently located on the 9th fairway, where he could enjoy a daily round of golf.  Advancing age forced their return north and they moved to Stromsburg in 2008.  Rex lived a life of generous love and faith that was spiced with lots of wit and words that will continue to touch his family and friends.  He will be missed and remembered by many. Rex was preceded in death by his brother Aubrey Jurgensen and sister-in-law Lelah, and by his son-in-law, Frankie Duba, all of Cordova. Rex is survived by his wife of 66 years, Betty, daughters Janet Duba of Cordova, Joyce (Ben) Votipka of Burress, Donna (Arnie) Hellbusch of Stromsburg; grandchildren, Leslie (Pat) Huggins, Jessica Votipka, Daniel Votipka, Austin (Anne) Hellbusch, and Audra (Todd) Jensen;  and 4 great-grandchildren.    Services for Rex will be Tuesday, January 24, 2012 at 10:30 a.m. at the Trinity Evangelical Lutheran Church in Cordova. Military graveside service will follow at the Zastrow Cemetery. Visitation will begin Monday from 1:00 until 8:00 with family greeting friends from 4:00 until 8:00 at the Farmer Funeral Home in Exeter, Nebraska. Memorials are directed to the family.

Rex L. Jurgensen passed away on Saturday, January 21, 2012 at Annie Jeffrey Memorial County Health Center in Osceola, NE at the age of 89 years, 4 months and 13 days.  He was born in Cordova on September 8, 1922, the second child of Fred... View Obituary & Service Information

The family of Rex L. Jurgensen created this Life Tributes page to make it easy to share your memories.

Send flowers to the Jurgensen family.