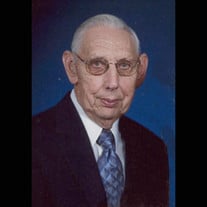 Rex Herman Albert Philippi was born on February 13,1924 on the family farm southwest of Bruning. He passed away January 5,2016 at Fairview Manor in Fairmont at the age of 91 years, 10 months and 23 days. He was the youngest of three sons. Rex was baptized and confirmed at Trinity Lutheran Church in Bruning. He attended Bruning School, graduating with the class of 1941. When Rex was a year old, his mother received a gas iron for her birthday. The iron exploded catching her and the house on fire, She saved Rex by throwing him out the window before perishing from the fire. Rex’s father was not able to care for the boys by himself, so Rex was sent to live with his maternal grandparents C.F. and Teresa Knutzen and his mother’s sister, Emma. Rex always considered “Aunt Emma” as his mother. After high school he attended sheet metal school in Lincoln before moving to Omaha to work at the Martin Bomber Factory, now Offutt Airfield, working on P-40 bombers. From there he moved to Buffalo, New York to work at another bomber factory where he built nose sections for P-26 bombers until he was inducted into the Army on August 13,1943. He served his country in the 77th combat engineers, building bridges in the Philippines, Okinawa and in the occupation of Korea until his discharge on February 13,1946. He rose to the rank of Staff Sargent at the age of 21. He was proud of his military service, belonging to Durham-Mammen Legion Post 166 throughout the rest of his life. He returned to Bruning and went to work for Hinrichs and Son Hardware before beginning his career as a carpenter. In Rex’s own words the highlight of his carpenter career was being part of the company that built the current Trinity Lutheran Church. On May 27,1950 he married Doris Ann Riel of Geneva at Grace Lutheran Church in Geneva. The couple settled in Bruning and became business partners with Rex and Doris Wilken as Rex Builders. Rex Builders built countless houses in the Bruning area. In 1973, Rex and Doris purchased the Bruning Grocery. Today, their son Kurt and grandson Paul own and operate the business. Rex served his community as town treasurer for many years and served on Trinity Lutheran Church Council. Rex loved baseball and played shortstop for several local teams. He shared his love for the sport with his son, grandsons, and great-grandsons. Doris and he rarely missed a ballgame, where he offered tips and coached from the bleachers. Rex enjoyed time with his grandchildren and great-grandchildren in Colorado, Oklahoma and Washington. He especially enjoyed the annual family reunion, last celebrated in May 2015 in honor of Rex and Doris’ 6Sth wedding anniversary. Rex and Doris loved to play cards and almost any board game. They were competitive, yet loved to laugh while they played. Rex used to go to the cafe every afternoon to play cards or cribbage with some of the other local men. Until just a few years ago, you could find Rex on a ladder trimming trees, checking the roof or hanging Christmas lights. He taught his son and his local grandsons how to carpenter, making sure that each one had their own hammer. Rex was preceded in death by his parents, his beloved Aunt Emma, brothers Adolph and Elden, sisters-in-law Maxine and Lorraine and a stillborn daughter. He is survived by his wife Doris, son Kurt and wife Kathleen of Bruning, daughter Mary and husband Bernie Miller of Colorado Springs,CO. Grandchildren Josef and Pat Philippi of Kearney, NE, Ryne and Daina Philippi and Paul and Megan Philippi all of Bruning. Joshua and Crystal Johnson of Seattle, Washington, Erin and Billy Scarborough of Woodward, OK and Colin Miller of Colorado Springs, CO. He is survived by 11 great-grandchildren with the anticipation of number 12 due any day and 5 step great-grandchildren. Rex is also survived by a special niece Judy and Bob Deterding of Belleville, KS, who he considered his daughter since the loss of her father during WWII. Countless other nieces, nephews, cousins and friends also mourn his loss. Rex suffered many tragedies and setbacks in his life, but he never let it define him. He led by example and followed his faith in God to the end. Funeral services for Rex were conducted from Trinity Lutheran Church in Bruning,on January 8,2016 at 2:00 p.m. with Pastor Stuart Sell officiating. Myra Kluck accompanied the congregation who sang "Beautiful Savior," "Just as I am,” “Amazing Grace,” and “How Great Thou Art.” Pallbearers were his grandchildren Josef Philippi, Ryne Philippi, Paul Philippi, Joshua Johnson, Colin Miller, Erin Scarborough and nephew John Riel. Interment was in Bruning Lutheran Cemetery with Military Rites performed by the Durham-Mammen Bruning American Legion Post 166. Farmer and Son Funeral Home of Geneva was in charge of arrangements. Rex loved the library and stated he had read every book in it. Memorials should be directed to the Bruning Library or to Trinity Lutheran Church.

Rex Herman Albert Philippi was born on February 13,1924 on the family farm southwest of Bruning. He passed away January 5,2016 at Fairview Manor in Fairmont at the age of 91 years, 10 months and 23 days. He was the youngest of three sons. Rex... View Obituary & Service Information

The family of Rex Philippi created this Life Tributes page to make it easy to share your memories.

Send flowers to the Philippi family.