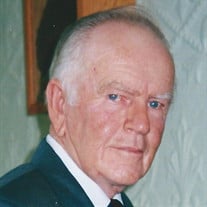 Funeral services will be conducted from the Stockholm Lutheran Church in Rural Shickley, NE on Thursday, January 29, 2015 at 11:00 AM with Pastor Jonathan Jensen officiating. Visitation will begin on Wednesday, January 28, 2015 at 1:00 PM through 8:00 PM with the family being present from 5:00 PM through 8:00 PM at Farmer & Son Funeral Home in Geneva. Graveside services will follow the funeral service at the Swedish Cemetery. Memorials are to be directed to the Shickley Community Foundation-Scholarship Fund. Richard M. Hendrickson was born on January 7, 1931 on the Hendrickson farm just northwest of the Stockholm Lutheran Church near Shickley, Nebraska. He was the youngest of seven children born to Albert and Lillie Hendrickson. He attended District 86 country school, located just east across the section from his home. He later remembered wanting to be chosen as the “water boy” who would get the water for the school from the nearby farm because it meant a chance to get baked goods from Frieda Hendrickson and maybe an opportunity to play with the farm dog. As a freshman in high school in the fall of 1944, World War II was still raging and he watched his older brother enter the Army and head to Europe. He graduated with the class of 1948 and began farm work in earnest. He was drafted into the Army during the Korean Conflict and followed his second-oldest brother, LeeRoy into the service. He spent six months in Korea during his service from 1952 to 1954. He made some lifelong friends in the Army, including Calvin (Shorty) Dittmar of Oconto, Nebraska and they shared several adventures both during that time and upon returning to the US. Dick returned to farming and had a deep love for the land. He had a knack for machinery and was often found making needed repairs on the spot. He and his brothers farmed together and also had a corn shelling rig that they took to various farms to shell for neighbors. In 1961, he moved into Shickley, along with his mother and sister, Norma, and he lived in that home for almost fifty years. He helped to care for Norma as her health and memory declined until her death in 2002. As his own memory declined, and following a health crisis, he moved into Heritage Crossings in Geneva. He made many friends there and was a constant presence with his large coffee cup. The church that he grew up seeing just over the trees every day was a constant in Dick’s life. He was baptized here as an infant. He was confirmed here. And here he served as the church treasurer for over 40 years. He often volunteered, (or “was volunteered” as he put it!) to participate in maintenance projects on this building, including shingling the steeple and stabilizing the foundation. In his retirement, he could often be found here at the Stockholm Cemetery, lovingly tending to trees and graves that needed attention. Although Dick never married or had children of his own, he became the “favorite uncle” and the “fun uncle” for his eleven nieces and nephews. And he was also a favorite for their spouses and their children. He was always ready for some escapade that was a little more daring or sporty than parents were and he liked seeing the fun and enjoying the fallout. Whether it was fireworks chasing him in the yard, or climbing over a forbidden fence, it was an adventure to go places with Uncle Dick! He nearly always had a smile on his face. And when his nephew Bob graduated high school, the two of them became the “official family moving crew”, helping to move Bill & Euhlie (once); Mary (more than once!); John & Chris, and others. He had a special fondness for children and his face would light up and his eyes would dance when the youngest members of the family were in the room. Recently he enjoyed meeting his first great-great-niece, Addison and trying to make her smile. In his retirement years, he was fond of tinkering with equipment, including his Model T, or helping out on the farm where needed. He was also able to take some road trips with friends and family, and enjoyed going to visit his nephew John and his family in North Dakota. He also readily pitched in to help out with home projects with niece Mary and her husband in Missouri. His fondness for animals was shown in his devotion to his dog, Smokey, and the neighborhood cats who regularly found a meal at his house. Richard was preceded in death by his parents, and by five of his six siblings: brothers, LeeRoy and Maurice Hendrickson; and sisters, Norma Hendrickson, Zelpha Burbank, and Melba Replogle. Dick is survived by one sister, Euhla Sharp, recently of Wilmette, Illinois and by his eleven nieces and nephews: Susan Biba of Geneva, Robert Hendrickson of Shickley, John (Chris) Hendrickson of North Dakota, Mary (John Emery) Hendrickson of Missouri; Diana (Dave) Replogle-Purinton, Kristina (Dave) DeHeras, Melinda (Mike) Gordon, all of California; Charles (Laurie) Replogle of Virginia; Dan (Lisa) Hendrickson and Loree Hendrickson of Shickley and Bill Sharp, recently of Wilmette, IL. He is also survived by fourteen great-nieces and nephews and one great-great niece.

Funeral services will be conducted from the Stockholm Lutheran Church in Rural Shickley, NE on Thursday, January 29, 2015 at 11:00 AM with Pastor Jonathan Jensen officiating. Visitation will begin on Wednesday, January 28, 2015 at 1:00 PM through... View Obituary & Service Information

The family of Richard M. Hendrickson created this Life Tributes page to make it easy to share your memories.

Funeral services will be conducted from the Stockholm Lutheran...

Send flowers to the Hendrickson family.