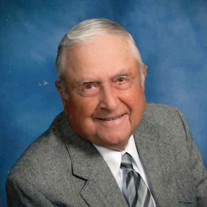 Richard Kleinschmidt was born to Harold and Agnes (Kamler) Kleinschmidt on January 4th, 1935 at Sutton, Nebraska and lived a hardworking and beautiful life. He passed away September 27th, 2021 at St. Elizabeth Medical Center in Lincoln, Nebraska at the age of 86 years, 9 months, and 22 days. Richard attended Shickley Public School graduating with the class of 1952. He had offers to play sports in college, but the lure of the family farm brought him back home. The start of his family began with letters during his time in the Army at Fort Bliss as he called it (Fort Blister) serving his country from 1957-1959. Those letters led to a beautiful Godly marriage to Rosalie Novak beginning on September 20th, 1960. Their marriage brought their two sons Russ and Rick into the picture through adoption and they both chose incredible wives, Jodi and Bridget. Richard also had 7 grandchildren who gave him so much pride and joy through their academic, musical, and sporting accomplishments. Richard led a purpose driven life and inspired everyone who crossed his path. He was a man of selfless character and always strove to put his family and neighbors first. Richard built a lasting legacy with his farm, but through the cultivation of his life’s work, he built more than a farm, he built a family. Any new equipment he acquired never looked the same for long as Rich always found improvements to make. There was no such thing as ‘it can’t be fixed’ in his vocabulary and he spent countless hours welding and every job had its own tractor. God and farming made up Richard’s moral code as God provided the soil and it was Rich’s job to care for it. His valued possession was the ‘To Do’ list that Rosie soon learned should never go through the washing machine. The ‘To Do’ list was important, but it never outweighed the importance of praising God in the pew on Sunday morning. Richard had also an incredible baseball career which started back in 1948 and his passion for the sport shone brightly through many years of playing and coaching in his community. Many kids in Filmore county had the privilege of learning about baseball from Richard, but they were really learning more about life. Richard was preceded in death by his father Harold Kleinschmidt and his mother Agnes Kleinschmidt; Brother Ronald Kleinschmidt; granddaughter Kamryn Kleinschmidt (infant); Brother-in-law Kenneth Kness; Sister-in-law Sue Kleinschmidt; and nephews Tim Kleinschmidt and Gary Kness. He is survived by his wife of 61 years Rosalie Kleinschmidt of Shickley, Nebraska; sons Russell (Jodi) Kleinschmidt of Shickley, Nebraska and Rick (Bridget) Kleinschmidt of Clermont, Florida; grandchildren Matyson, Kale, Jadyn, and Dalton Kleinschmidt of Shickley, Nebraska, and Jordan Kleinschmidt and fiance Josh Dilena and Jackson Kleinschmidt of Clermont, Florida; sisters Dorothy (Harold) Moravec of Geneva, Nebraska and Deb (Gary) Tettenborn of Omaha, Nebraska; brother Bill Kleinschmidt (special friend Jo Jones) of Geneva, Nebraska; sisters-in-law Carol (Bart) Rath of Papillion, Nebraska and Bonnie Kness of Fairmont, Nebraska; and many nieces, nephews and friends. A Funeral Mass for Rich was held on Friday, October 1, 2021 at 10:30 a.m. at St. Joseph Catholic Church in Geneva, Nebraska. A Rosary was prayed the evening before at 7:00 p.m. at the Church. Father Harlan Waskowiak presided over the Services. Carol Grote accompanied the congregation in the singing of “Amazing Grace,” “I Am The Bread Of Life,” “Song Of Farewell,” and “Let There Be Peace On Earth.” Jordan Kleinschmidt was accompanied by Josh Dilena and sang “On Eagles’ Wings.” Pallbearers included Randy Kleinschmidt, Scott Kleinschmidt, Steve Kleinschmidt, Chad Tettenborn, Travis Tettenborn, and Tom Novak. It was Rich’s wish to be cremated following the Funeral Mass and his Ashes will be placed in the St. Joseph Catholic Cemetery at a later date. Military Honors were held outside the St. Joseph Catholic Church following the Funeral Mass. Honors were provided by the Shickley American Legion Post 164 and the Nebraska Military Honor Guard. Farmer & Son Funeral Home was in care of the arrangements and online condolences can be left at www.farmerandsonfuneralhome.com Memorials are suggested to the BDS Legion Baseball Program or the St. Joseph/St. Mary Catholic Churches.

Richard Kleinschmidt was born to Harold and Agnes (Kamler) Kleinschmidt on January 4th, 1935 at Sutton, Nebraska and lived a hardworking and beautiful life. He passed away September 27th, 2021 at St. Elizabeth Medical Center in Lincoln, Nebraska... View Obituary & Service Information

The family of Richard H. Kleinschmidt created this Life Tributes page to make it easy to share your memories.

Send flowers to the Kleinschmidt family.