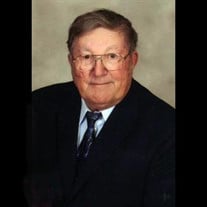 Richard Dean Krupicka was born to Adolph A. & Emma B. (Krisl) Krupicka on August 16, 1938 on the family farm two and half miles south of Milligan, Nebraska, and passed away on August 27, 2019 at Heritage Crossings in Geneva, Nebraska, at the age of 81 years and 11 days. Richard attended Milligan Public School, graduating in 1955. He was a farmer all his life and enjoyed the work on the farm. Richard married Donna Kay Dolnicek on August 31, 1963 at Sacred Heart Catholic Church in Lawrence, Nebraska. To this union three children were born: Rodney Joseph, Michelle Rene, and Kay Marie. They spent the first 50 years of their married life on a farm near Milligan. The farm had been in the family for over 100 years. They later moved into Milligan. Richard never knew a stranger. He loved to go to sales, not to buy, but to talk to friends. He made many new friends from the sales he frequented. He also enjoyed joining friends for coffee each day. He was always ready to help anyone when needed. Richard served on the Milligan School Board and was a trustee of the St. Wenceslaus Church for many years and spent many hours making the new church become a dream-come-true. His faith was very important to him. Richard was preceded in death by his parents, Adolph and Emma Krupicka; father-in-law and mother-in-law, Joseph and Lillian (Kalvoda) Dolnicek; daughter, Kay Pavelka; brothers, Lawrence, Raymond, Adolph, and William; Sisters, Antoinette, Rita, and Grace. He is survived by his wife of 56 years, Donna Krupicka of Milligan, Nebraska; son, Rod Krupicka and wife, Diana of Milligan, Nebraska; daughter, Michelle Backemeyer and husband, Brad of Elmwood, Nebraska; son-in-law, Ron Pavelka of Glenvil, Nebraska; grandchildren; Marcus, Savana and Cheyenne Krupicka of Milligan, Nebraska, Ashley Smidt and husband, Ely of Fairfield, Nebraska, Ryan Pavelka of Cincinnati, Ohio, Greg Pavelka of Glenvil, Nebraska, and Tatum Backemeyer of Elmwood, Nebraska; great granddaughter, Willa Smidt of Fairfield, Nebraska; sisters-in-law and brother-in-law, Thelma Soucie and husband, LeRoy of Fairfield, Nebraska, Thelma Davis of Ocola, Florida, and Liela Krupicka of Davenport, Nebraska; and many nieces and nephews. A Funeral Mass for Richard was held on Wednesday, September 4, 2019 at 10:30 a.m. at St. Wenceslaus Catholic Church in Milligan, Nebraska. Father Brendan Kelly officiated the Mass. Agnes Anderson accompanied the congregation in the singing of “Here I Am Lord,” “Be Not Afraid,” “I Am The Bread Of Life,” and “Prayer of St. Francis.” Pallbearers for the service included Ryan Pavelka, Greg Pavelka, Marcus Krupicka, Alan Krupicka, Richard Kassik, and Ely Smidt. Honorary Pallbearers included Ashley Smidt, Savana Krupicka, Cheyenne Krupicka, and Tatum Backemeyer. A Private family Graveside Service was held in the Bohemian National Cemetery following the Funeral Mass. Farmer & Son Funeral Home was in care of the arrangements and online condolences can be left at www.farmerandsonfuneralhome.com. Memorials are suggested to the St. Wenceslaus Catholic Church or the Milligan American Legion HSSK Post 240.

Richard Dean Krupicka was born to Adolph A. & Emma B. (Krisl) Krupicka on August 16, 1938 on the family farm two and half miles south of Milligan, Nebraska, and passed away on August 27, 2019 at Heritage Crossings in Geneva, Nebraska, at the... View Obituary & Service Information

The family of Richard D. Krupicka created this Life Tributes page to make it easy to share your memories.

Richard Dean Krupicka was born to Adolph A. &amp; Emma B. (Krisl)...