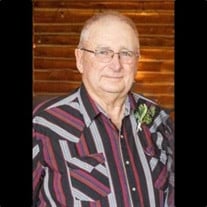 Richard William Michl was born on August 5. 1938 to Louis and Katherine (Morgan) Michl at Exeter, Nebraska. He passed away on June 30, 2021 at the Fillmore County Hospital in Geneva, Nebraska at the age of 82 years, 10 months, and 25 days. He attended Rural School District 95 and 5 and Exeter Public School, graduating in 1955. After graduating, he worked for Reimers and Kaufman, Styskal Irrigation, and Allen Rohrig. On March 23rd, 1958 he married Evelyn Shestak in Dorchester, Nebraska. To this union three sons and a daughter were born. Richard farmed southeast of Exeter for many years. Richard and Evelyn divorced in 1989. On June 25, 1990, he married Carol (Kotas) Vavra in Omaha and they made their home in Milligan where he resided until his death. Richard continued to farm until 1997 when health issues forced him to retire. He loved harvest and always looked forward to that time of the year. After retirement, he drove a school bus and drove for the Houchin Bindery and the All-American Bindery. He helped his sons farm whenever he was able. Richard served on the Exeter School Board, Milligan Township Board and Chairman of the Exeter Methodist Church Board. He was a past president of the Exeter Feeders and Breeders Association and served on the Fillmore County Fair Board for many years. He was a 4-H leader for nearly 25 years. Richard was a member of the Milligan Methodist Church, the Milligan Fire Department and the Milligan City Council, serving as Chairman for many years. Richard was known to be a fearless driver, driving trucks for the bindery through any city with no problem. He lived for his kids and grandkids, spending many hours attending their sporting events to cheer them on. He was an avid Husker fan and especially loved football and volleyball. Richard bowled on the Kassik Milling bowling team for over 40 years. He also loved to play cards and never turned down a chance to play! Richard was preceded in death by his parents, Louis and Kathryn; two brothers Robert Michl and William Michl; and an infant granddaughter Theresa Katherine Michl. He is survived by Carol, his wife of 31 years; sons Alan (Shari) Michl, Robert (Michelle) Michl and David (Christy) Michl; daughter Nancy (Phil) Bargen; children of choice Kathryn (Brad) Hockemeyer, Kristine (Brian) Roffman, and Allen (Carri) Vavra; grandchildren Allison (James) Bitz, Nate (Abby) Michl, Max Reinert, Jon (Emily) Michl, Michelle (Colby) Dahlke, Cindy, Elly, Lucas and Logan Bargen, Sarah and Abby Hockemeyer; Kellen Roffman, and Kaitlyn, Andrew and Aidan Vavra; great-grandchildren Evie and Jonah Bitz, Hadlee and Bryson Michl, and Cason Michl; sister-in-law Sally Michl; brother-in-law Larry (Karen) Kotas; and many other relatives and friends. A Graveside Service for Richard was held on Wednesday, July 7, 2021 at 9:00 a.m. at the Exeter Cemetery. Pastor Murry Johnston presided over the services. A Memorial Service followed the Graveside Service at 11:00 a.m. at the Milligan Auditorium in Milligan, Nebraska. The recorded selections included “The Old Rugged Cross,” “If Tomorrow Never Comes,” and “Go Rest High On That Mountain.” Honorary Pallbearers included Allison Bitz, Nathan Michl, Max Reinert, Jonathan Michl, Michelle Dahlke, Cynthia Bargen, Elizabeth Bargen, Lucas Bargen, Logan Bargen, Sarah Hockemeyer, Abby Hockemeyer, Kellen Roffman, Kaitlyn Vavra, Andrew Vavra, and Aidan Vavra. Farmer & Son Funeral Home was in care of the arrangements and online condolences can be left at www.farmerandsonfuneralhome.com Memorials are suggested to the Milligan Fire Department or the Exeter-Milligan School Foundation.

Richard William Michl was born on August 5. 1938 to Louis and Katherine (Morgan) Michl at Exeter, Nebraska. He passed away on June 30, 2021 at the Fillmore County Hospital in Geneva, Nebraska at the age of 82 years, 10 months, and 25 days.... View Obituary & Service Information

The family of Richard W. Michl created this Life Tributes page to make it easy to share your memories.

Send flowers to the Michl family.