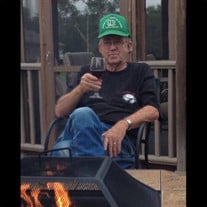 Richard Minor Nicholas was born on February 26, 1934 to Thomas and Marjorie (Richardson) Nicholas in Laurel, Montana. He passed away on Sunday, March 6, 2022 at the Fillmore County Hospital in Geneva, Nebraska at the age of 88 years and 8 days. He grew up in the Laurel area and spent several summers working in the nearby Yellowstone National Park. He graduated from Laurel High School in 1953 and enlisted in the Air Force in 1954. His Air Force buddies called him “Nick” and the name stuck with him for the rest of his life. On April 1st, 1956, one of Nick’s buddies introduced him to the love of his life, Doris Harre. They married in 1957 and had 3 children: Shari, Tim and Hope. The family lived the Air Force life and were stationed in Lincoln, Tampa, Florida, Tucson, Arizona and Alamogordo, New Mexico before Nick retired in 1974. Nick was deployed several times during his career, including tours of duty to England, Vietnam, the Philippines, and Thailand. He was honored with the Bronze Star to recognize his exemplary service during his tour in Vietnam. Nick moved his family to Exeter in 1974 where he worked for Erdkamp Construction for a short time. He then became Maintenance Man for the village of Exeter for the next 20 years. After retirement, he enjoyed helping his friends Gerry and Vicki Geiger with harvest. The best part of the day was the “safety meeting” when the work was done! Nick was a member of St. Stephen’s Catholic Church in Exeter. He and Doris spent many hours helping with the recent church renovation. He also crafted the wooden nativity scene displayed in front of the church and looked forward to setting it up each year. He was a member of the American Legion and a former Commander of Exeter American Legion Post 218. Nick loved the outdoors, with hunting and fishing being his favorite pastimes. He made several trips to Canada to fish with one of his favorite fishing buddies, his nephew and good friend Glen Coffey. His daughter Shari and grandson Nathan were lucky enough to take a turn going along. He loved gardening and was especially proud of his flowers, planting multiple gladiolas and dahlias as well as a vegetable garden up to last year. Nick was also an avid “rockhound” and loved to collect rocks to polish and make into jewelry. He had a love of frogs and he received many frogs from family and friends; his collection currently stands at 1,973. One of the highlights of his life was being featured on the “Lance’s Journal” program on Channel 10. Nick’s pride and joy were his wife, his kids, grandkids and great-grandkids. He was able to celebrate his 88th birthday while in the hospital recuperating from a stroke and a broken hip. During the party, he pointed at the group who were there with him and said “Mine- all mine!!” He loved people and loved to visit; he will be remembered for his sense of humor and love of frogs, whiskey sours and funny t-shirts! Nick was preceded in death by his parents; stepfather Celester Goman; and infant granddaughter Theresa Katherine Michl. He is survived by his wife of 65 years, Doris; children Shari (Alan) Michl of Exeter, Tim (Marie) Nicholas of Central City, and Hope (Ken) Strate of Exeter; grandchildren Allison (James) Bitz, Nathan (Abby) Michl, Matt (Jenny) Nicholas, Angela (Noah) Broekmeier, Deidre (Kevin) Boyle and Victoria Androyna; great-grandchildren Evie and Jonah Bitz, Cason Michl, Leo and Layne Nicholas, and Oliver and Amelia Broekmeier; sister, Sharon (Don) Grove of North Fork, California; sisters-in-law Leona Smith, Jeanette Paulus, and Evelyn Coffey; brother-in-law Frank Harre; and many nieces and nephews and his beloved cat, Angie. A Funeral Mass for Nick was held on Thursday, March 10, 2022 at 10:00 a.m. at St. Stephen Catholic Church in Exeter, Nebraska. A Rosary was prayed on Wednesday, March 9, 2022 at 7:00 p.m. at Farmer Funeral Home in Exeter, Nebraska. Father Brendan Kelly presided over the Services. Agnes Anderson was the organist and Anne Ruhl was the cantor and the hymns played were “How Great Thou Art,” “Be Not Afraid,” “On Eagle’s Wings,” and “Let There Be Peace On Earth.” Pallbearers for the Service included Randy Paulus, Alan Harre, Kenny Harre, Wayne Kuska, Dan Smith, and Carl Hansen. Honorary Pallbearers included all of Nick’s many nephews. A Graveside Service with Military Honors was held in the Exeter Cemetery following the Funeral Mass. Military Honors were provided by the Exeter American Legion William Sullivan Post 218. The Buglers were Mark Perez and Kierra Papik. Farmer & Son Funeral Home was in care of the arrangements and online condolences can be left at www.farmerandsonfuneralhome.com Memorials are suggested to the St. Stephen Catholic Church or to the family for future designation.

Richard Minor Nicholas was born on February 26, 1934 to Thomas and Marjorie (Richardson) Nicholas in Laurel, Montana. He passed away on Sunday, March 6, 2022 at the Fillmore County Hospital in Geneva, Nebraska at the age of 88 years and 8 days.... View Obituary & Service Information

The family of Richard M. "Nick" Nicholas created this Life Tributes page to make it easy to share your memories.

Send flowers to the Nicholas family.