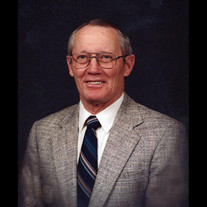 Richard Clark Nichols was born to Jesse Loyd Nichols & Eunice Marie (Clark) Nichols on February 3, 1935 in Geneva, Nebraska. He passed away on December 26, 2019 at his home in Geneva, Nebraska at the age of 84 years, 10 months, and 23 days. The family lived next to the Library on Geneva's main street. His good friend, Charlie Grothe, always said, "He was the toughest kid on the block!" Charlie must have been his equal, as he dislocated his shoulder while playing football in high school and continued to play. Dick graduated from Geneva High School on May 21, 1954 and enrolled in Doane College, which he didn't take too seriously, and then he decided to join the Army. He entered the service on February 7, 1957 and was honorably discharged on February 6, 1959. He continued reserve duty until January 31, 1963. While attending college, Dick met Camille Jo Bond and they married August 21, 1960 in Sidney, Nebraska. They lived in Denver for a while and eventually Columbus, Nebraska. Dick worked at various jobs and also earned his Bachelors degree in Economics from Doane College in 1965. They adopted a baby in 1968, Kendra Jo, who remained very special to him after their divorce. On June 26, 1971, he married Nancy Mae Hopwood Stevens in Shelby, Nebraska. Dick and Nancy settled in Geneva. He adopted her son, Jimmy, and was a good "Daddy 0" as Jim called him. Family was important to him and he enjoyed many special occasions with them. Grandsons, Jason & Jake were the absolute joy of his life. Concrete Construction was Dick’s expertise and "concrete" was his nature. He built many "poured wall" residential basements, including his home, and many other structures in the surrounding area while owning his own business, R.C. "Dick" Nichols Contracting. After selling his business, he worked for Biegert Construction, Wilke Contracting, and L.J. Webb Contractor as Job Foreman and Equipment Operator, building box culverts and laying drainage pipe throughout Nebraska and Kansas. He made many friends in the industry. He took a few years off the road in the early 90’s and worked for his Son, helping him get his place of business, Nichols Collision Center, established, offering his mechanical and building knowledge. He eventually returned to road work. Later in life, local farmers found him handy during harvest and he especially enjoyed working part time for Schoenholz Auction, bringing home more treasurers than needed, much to his wife's dismay! Dick was baptized as a baby and became a member of the United Methodist Church October 1, 1944. He was a Boy Scout, and a member of Geneva Lions Club and Hidden Hills Country Club for many years. He enjoyed playing cards, golfing, traveling, camping with his family, dancing, reading, crossword puzzles, sports, and lending a helping hand to his family and the community, where he was known by everyone as "Pickles"! Dick was preceded in death by his parents Jesse & Eunice; and sister, Lila Miller. He is survived by his wife, Nancy; son, James "Jim" & wife Christina Nichols; grandsons, Jason & Jacob "Jake" Nichols; special daughter, Kendra Stevens & fiance Eric Beckner; brother-in-law, George Miller; sisters & brother-in-laws, Alice & Ross Correnti, Debra & Jim Wicke; brother & sister-in-law, Edgar & Pamela Nichols; nieces, nephews, and his wife's family all of whom were a special part of his life. A Memorial Service for Dick was held on Tuesday, December 31, 2019 at 2:00 p.m. at the United Methodist Church in Geneva, Nebraska. Kim Dunker officiated the service. The recorded selections “It Is Well With My Soul,” “Let It Be,” and “What A Wonderful World.” Honorary pallbearers for the service included Dick Schoenholz, Dale Richards, Ron Glasscock, Leo Lott, Bill Kleinschmidt, Howard Lefler, Ron Graham, and Don Dunkin. It was Dick’s wish to donate his body to science. When they are complete with their studies, he will be cremated and his ashes will be interred in the Geneva Public Cemetery. Farmer & Son Funeral Home was in care of the arrangements and online condolences can be left at www.farmerandsonfuneralhome.com Memorials are suggested to the Geneva Volunteer Fire Department.

Richard Clark Nichols was born to Jesse Loyd Nichols & Eunice Marie (Clark) Nichols on February 3, 1935 in Geneva, Nebraska. He passed away on December 26, 2019 at his home in Geneva, Nebraska at the age of 84 years, 10 months, and 23 days.... View Obituary & Service Information

The family of Richard Clark “Dick” Nichols created this Life Tributes page to make it easy to share your memories.