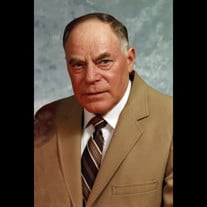 Richard H. Yaeger was born February 23, 1920, to Michael and Anna (Reinsch) Yaeger in Shickley, Nebraska. He passed away on Sunday, September 1, 2019 at Heritage Crossings Nursing Home in Geneva, Nebraska at the age of 99 years, 6 months, and 9 days. Richard was baptized and confirmed at St. Mary’s Turkey Creek Catholic Church. His mother died when he was seven years old. Richard attended a rural school through the eighth grade and then attended one year at Geneva High School. He left school to work on the farm and help provide for his large family. Richard enlisted in the U.S. Army on October 16, 1939 at Fort Crook (now Offutt Air Base), Bellevue, Nebraska. He participated in four major campaigns and invasions—Northern Africa, Tunisia, Sicily, and Italy. He served with the 3rd Division of the 5th Army in southern Italy and was wounded twice in action by tank and mortar shrapnel. He was bestowed two Purple Hearts, and also the Silver Star for Gallantry in Action, when he assumed leadership of his platoon and drove off a German counterattack, armed only with a rifle, and killing seven of the enemy. He was honorably discharged as a Staff Sergeant on July 12, 1945. He also served as a guard in a P.O.W. camp in Kansas following his active duty. Following WWII, Richard took up farming in the Shickley and Grafton areas. On January 6, 1964, he married Dorothy (Rolfes) Waltrip at St. Helena’s Catholic Church in Grafton. They built a new home northeast of Sutton, moving into it in January 1965. Robert and Janet Waltrip attended Grafton Public School. Richard retired from farming in 1984, remaining on the farm, and taking up gardening as a hobby. Together, Dorothy and “Dick” hosted many large family dinners and gatherings at their home and took many memorable trips to Las Vegas with family and friends. In 2009, Richard and Dorothy became residents at the Heritage Crossings nursing home in Geneva, and resided there until their deaths. Richard was a member of the Grafton Volunteer Fire Department for 30 years. He was a lifetime member of the American Legion, Post #61 in Sutton, and also a lifetime member of the Geneva VFW, as well as the Elks Lodge in York. Richard was preceded in death by his parents, Michael and Anna, wife Dorothy, stepchildren Janet and Robert, and siblings Joseph, Charles, Vincent, Albert, Rosella, John, Agnes, and Lillian. He is survived by nieces, nephews, and cousins. A Funeral Mass for Richard was held on Friday, September 6, 2019 at 10:00 a.m. at St. Helena Catholic Church in Grafton, Nebraska. Fathers Michael Zimmer and Harlan Waskowiak officiated the Mass. Deb Hoarty accompanied the congregation in the singing of “Be Not Afraid,” “I Am The Bread Of Life,” “On Eagles’ Wings,” and “Amazing Grace.” Pallbearers for the Mass included Rod Kudlacek, Gary Kudlacek, Dick Hoarty, Robert Fessler, Jeff Timmermans, and Jack Galusha. Interment was held in the Holy Cross Cemetery following the Funeral Mass. Military Rites were performed by the Sutton American Legion Argonne Post #61. Farmer & Son Funeral Home was in care of the arrangements and online condolences can be left at www.farmerandsonfuneralhome.com. Memorials are suggested to the St. Helena Catholic Church.

Richard H. Yaeger was born February 23, 1920, to Michael and Anna (Reinsch) Yaeger in Shickley, Nebraska. He passed away on Sunday, September 1, 2019 at Heritage Crossings Nursing Home in Geneva, Nebraska at the age of 99 years, 6 months,... View Obituary & Service Information

The family of Richard H. Yaeger created this Life Tributes page to make it easy to share your memories.