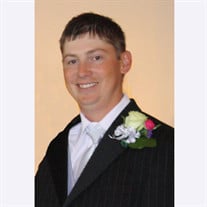 Richard (Rick) Allen Myers was born July 7, 1981 to Lowell T. and Helen (Mussman) Myers in York, Nebraska. His body finally got tired and he went to join his family and friends in Heaven on October 31, 2014 in Lincoln, Nebraska. Rick grew up in Ohiowa, Nebraska and lived there all his life. Rick was a member of St. John's Lutheran Church in Ohiowa. He was baptized and confirmed at St. John's Church, and he was an active member of the youth group and served as an usher for the church during his adult life. Rick was also a proud member of the Ohiowa Volunteer Fire Department since he returned home from college. At the age of 3 he was diagnosed with Ewing Sarcoma (bone cancer) and beat all odds and won that battle. Rick was involved in 4-H throughout his junior high and high school years with the help of his uncles. Rick was a very likeable, fun loving guy with an infectious smile and witty remarks. Rick attended Ohiowa Public School through the 6th grade and then attended Bruning Public School, graduating in 2000. After graduation he attended SCC-Milford in Auto Mechanics, graduating with distinction in 2002. He worked for Eichelberger's Service near Shickley for a few years before pursuing his dream of owning his own semi. When Rick wasn’t in the semi, you could find him helping his uncles and cousins on the farm. Rick was able to harvest one last time this year, helping finish up with the corn harvest just days before he left us. On July 31, 2011 he married the love of his life, Cynthia (Cindy) Herbek, and they enjoyed a little over 3 wonderful and memorable years together. Rick loved to go camping, hunting and crop touring with his uncle B.J. Rick's favorite TV shows were nothing but cooking shows. He loved to cook, but not clean up the mess. He fought a courageous battle against cancer for a little over 2 years and he never complained one bit. He fought his hardest to the very end. Rick was preceded in death by his grandparents, Lowell J. and Aileen Myers, aunts, uncles, and cousins. He is survived by his spouse, Cindy; his parents, Lowell “Butch” and Helen Myers; his sister, Annie and Rod Manley; grandparents Dallas and Claire Ann Mussman; his parents-in-law, Albert and Marian Herbek; half-sister Katina and Scott Bradley; Brothers-in-law and Sisters in-law, Ron and Marie Herbek, Gary Herbek, Don and Lisa Kathman and Randy Herbek; and numerous nieces, nephews, great niece, aunts and uncles, cousins, friends and his best buddy Gino. Funeral services for Rick were held on Monday, November 3, 2014 at 10:30 a.m. at the St. John’s Lutheran Church in Ohiowa. Pastors James & Becky Sells officiated the services. The recorded music “The Old Rugged Cross,” “If I Had Only Know,” “See You Again,” and “My Way” were played during the service. Pallbearers for the service included Justin Jiskra, Steve Ozenbaugh, Larry Nun, Charlie Morton, Loren Eichelberger, and Corey Stengel. Interment was held in the Ohiowa Public Cemetery following the funeral service. Farmer & Son Funeral Home conducted the services. Memorials are directed to the family for later designation.

Richard (Rick) Allen Myers was born July 7, 1981 to Lowell T. and Helen (Mussman) Myers in York, Nebraska. His body finally got tired and he went to join his family and friends in Heaven on October 31, 2014 in Lincoln, Nebraska. Rick grew... View Obituary & Service Information

The family of Rick A. Myers created this Life Tributes page to make it easy to share your memories.

Send flowers to the Myers family.