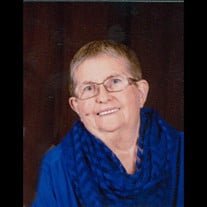 Rita Louise Lichti was born on September 16, 1946 in Friend, Nebraska to Leo Urban and Anna Capek Urban of Milligan, Nebraska. She graduated from Milligan High School in 1964 and attended Vocational School of Practical Nursing in Kearney. She graduated in 1965 with a degree as a licensed practical nurse. She started working at Fillmore County Hospital in Geneva in 1966 and retired after 50 years of dedicated service at that same hospital in July of 2017. She married the love of her life, Louis Lichti, on September 22, 1967 after three months of courting and a three month engagement. They had five children, Patricia Ann Wenz, husband Jamie and sons Nathan and Zach; Audrie Louise Bates, husband Brian and son Ryan, daughter Carlie; Carmen Denise Westfahl, husband Brion and daughters Emily and Elizabeth; Craig Louis Lichti, wife Kayla, all of Lincoln. She also had many grand dogs and grand cats. Rita, who came to be known as Ritsi, enjoyed her work as a nurse and was always a caretaker of those around her, whether she was nursing a cold or making sure they had a cold drink. She was an avid supporter of everything her kids and grandkids were involved in and was always so proud of their accomplishments. She loved to travel and spent many hours with her family in the RV whether it was to Lovewell, Worlds of Fun, South Dakota or Disney World. Her kids enjoyed having her and Lou along on family vacations and involved in family activities. She loved to experience things with her family and saw the world through the eyes of a child with enthusiasm and excitement. Rita loved to work in her yard gardening and caring for animals. She never met an animal, stray or house broken, that she didn’t love. She supported Husker football and volleyball. If they weren’t playing on tv, she had some other sporting event on. If not sports, it would be Molly B’s Polka Band. Rita passed away on Christmas Eve at 8:24 p.m. after a battle with breast cancer. She is preceded in death by her sister Eunice, parents Leo and Anna, son Daniel Louis and grandson Tyler Wenz. A Funeral Service for Rita was held at St. Andrew’s Lutheran Church in Lincoln, Nebraska on Monday, December 30, 2019 at 10:30 a.m. Pastor Kimberlee Osborn officiated the service. Kaleb Wilkening accompanied the congregation in the singing of “Children Of The Heavenly Father,” “Borning Cry,” and “Amazing Grace.” Pallbearers for the service included Tim Warrelmann, Jim Warrelmann, Glen Capek, Roger Capek, Ryan Bates, Nathan Wenz, Zach Wenz, and Max Lichti. Honorary pallbearers included Carlie Bates, Emily Westfahl, Elizabeth Westfahl, Bill Reinsch, Darin Lichti and Brandon Lichti. A Graveside Service for Rita was held at the Geneva Public Cemetery at 3:00 p.m. on Monday, December 30, 2019. Farmer & Son Funeral Home was in care of the arrangements and online condolences can be left at www.farmerandsonfuneralhome.com Memorials are suggested to the Fillmore County Hospital or The Lichti Family to be designated at a later day.

Rita Louise Lichti was born on September 16, 1946 in Friend, Nebraska to Leo Urban and Anna Capek Urban of Milligan, Nebraska. She graduated from Milligan High School in 1964 and attended Vocational School of Practical Nursing in Kearney. She... View Obituary & Service Information

The family of Rita L. Lichti created this Life Tributes page to make it easy to share your memories.