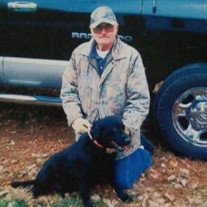 A Memorial Service for Robert will be held on Monday, July 12, 2021 at 2:00 p.m. at the United Methodist Church in Geneva, Nebraska with Kim Dunker presiding. No visitation - cremation. Military Graveside Services will be conducted following the memorial service at the Geneva Public Cemetery in Geneva, Nebraska. Memorials are to be directed to the family to be designated at a later date. Robert Leroy Bender was born April 16, 1930 to Joseph and Mildred in Geneva, Nebraska. Bob resided in Nebraska for the entirety of his life. Growing up Bob spent summers working as a lifeguard at the Geneva pool and played sports with his younger brothers George and Rod, throughout his high school years and into his 20’s. He was drafted into the U.S Army as a Forward Observer for a Heavy Morter Company in the Korean War. After returning from war, he entered into the Reserves as a Military Police. Bob was a carpenter, mechanic, and handyman by trade. He loved hunting, fishing, baking, and watching football, “no round ball”, as he would say, unless it was the only sport on T.V. Snickers, popcorn, and ice cream is what would be for breakfast and snack if he had any say in the matter. You’d always find Bob with his pipe and Captain Black along with his dogs or trying his luck at the horse races. Bob led a long life into his 90’s and was fortunate enough to live on his own on a ranch north of Taylor, Nebraska. He visited the Lazy “D” Restaurant daily to have morning coffee and then return twice, or three, or sometimes 5 times a day to visit with Derek & Jessica, the owners of the restaurant. He also won the 2015 Lazy “D” Annual Chili Cook off. Bob is survived by his sister, JoAnn Polk of York, Nebraska; sons, Brian of Kearney, Nebraska, Troy of Phoenix, Arizona and daughter Lisa of Hubert, North Carolina as well as many grand-children and great grandchildren. Bob survived the 2020 Pandemic at the Brookstone View Assisted Living in Broken Bow and passed on June 23, 2021 after 91 years of living the “Good Life” in Nebraska.

A Memorial Service for Robert will be held on Monday, July 12, 2021 at 2:00 p.m. at the United Methodist Church in Geneva, Nebraska with Kim Dunker presiding. No visitation - cremation. Military Graveside Services will be conducted following... View Obituary & Service Information

The family of Robert Leroy Bender created this Life Tributes page to make it easy to share your memories.

A Memorial Service for Robert will be held on Monday, July 12,...

Send flowers to the Bender family.