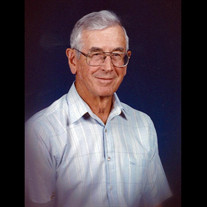 Robert Bettger was born the second of four children to John Bettger and Lydia Bitterman on May 16, 1923. He passed away October 2, 2019 at the Fairview Manor in Fairmont, Nebraska at age 96 years 4 months and 17 days. Robert was born and raised on farms around the Fairmont area and attended rural school District 18. As a child during the Dust Bowl years, Robert had interesting stories of tending livestock in the road ditches with his siblings as drought was ravaging the land. Robert graduated from Fairmont High School in 1941. He spent several years farming with his dad, working at Harrington’s and helping neighbor farmers. Robert was drafted into the armed services and chose the Navy. He took basic training in Great Lakes, Illinois in 1945. He was then assigned to the receiving center in Shoemaker, California for further training. His first assignment was to a small aircraft carrier that made special runs from San Francisco to Hawaii. His duty was in the kitchen and he enjoyed sitting on deck and peeling potatoes. His last assignment was to a destroyer escort when the war ended. He was honorably discharged on March 7, 1946. On May 26, 1946, Robert married Lila Mae Lovegrove at the United Methodist Church in Geneva, Nebraska. On the farm northwest of Fairmont, three sons were born. For several years he did custom combining following the wheat harvest from Texas and Oklahoma, through Nebraska and into the Dakotas. In 1971 Robert and Lila built a new home in Fairmont. The boys were starting to come back and farm so Robert and Lila would spend some time in the winter traveling. They would visit Robert’s brother and sister who lived in Arizona and California. Robert and Lila enjoyed square dancing and spent many weekend evenings traveling the Fairmont-York area with their square dance club. Robert helped the kids with gardening activities which included canning corn and picking apples and making apple juice. Later in life Robert took up golf and enjoyed his time playing with friends from Fairmont and Geneva. Robert also spent some afternoons with his great grand kids fishing in one of his farm ponds. He had a wood working shop and loved making birdhouses. Robert and Lila always liked going for rides to see what activities were going on in the farm fields. Robert was a member of the United Methodist Church, a lifetime member of the American Legion, past member of the Odd Fellows, Fairmont school board, city council, and other boards. Robert’s last few years at Fairview Manor he enjoyed having a garden to occupy his time. Robert was a devoted husband, father, grandfather and great grandfather. He was preceded in death by his parents John and Lydia Bettger, wife Lila, son William D., brothers John and Gilbert, and sister Dorothy. He is survived by son Robert E. and wife Sandra of Fairmont, daughter-in-law Susan L. of Geneva, son Paul E. and wife Carol of Fairmont, sister-in-law Jean Lovegrove, sister-in-law Shirley Lovegrove, 8 grandchildren, 16 great grand children, and numerous relatives and friends. A Funeral Service for Robert was held on Monday, October 7, 2019 at 10:30 a.m. at the Fairmont Community Church in Fairmont, Nebraska. Pastor Seungli You officiated the service. Shirley Milton provided the prelude and postlude music and also accompanied the congregation in the singing of “The Old Rugged Cross.” The recorded selection “You’ll Be There” was also played during the service. Pallbearers for the service included Jeff Bettger, Matt Bettger, Dean Acheson, Wade Lancaster, Scott Bettger, Eric Bettger, Darin Erstad, and Brent Parsons. Interment was held in the Fairmont Public Cemetery with flag presentation performed by the Fairmont American Legion Lt. Forbes Post 21. Farmer & Son Funeral Home was in care of the arrangements and online condolences can be left at www.farmerandsonfuneralhome.com. Memorials are suggested to the Fairmont Community Church or the Fairview Manor in Fairmont.

Robert Bettger was born the second of four children to John Bettger and Lydia Bitterman on May 16, 1923. He passed away October 2, 2019 at the Fairview Manor in Fairmont, Nebraska at age 96 years 4 months and 17 days. Robert was born and... View Obituary & Service Information

The family of Robert Bettger created this Life Tributes page to make it easy to share your memories.

Robert Bettger was born the second of four children to John Bettger...