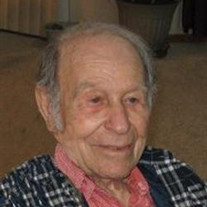 Memorial services for Robert will be held on Wednesday, February 26, 2014 at 11:00 a.m. at the Farmer & Son Funeral Home in Geneva. Military Rites will follow the memorial service outside the Funeral Home. They will be performed by the Geneva VFW Samuel J. Marsh Post 7102. Memorials in lieu of flowers are directed to the Nebraska Special Olympics. Robert L. Gregory, 92, formerly of Geneva, died February 21, 2014, at the Grand Island Veterans Home. Mr. Gregory was born March 23, 1921, at Cope, Colorado to Robert K. and Mina B. (Sibert) Gregory. He was the youngest of three children. He was preceded in death by one son, Robert H. Gregory, and sisters, Lura (Gregory) Rollins, and Clara (Gregory) Yurk; their husbands, Calvin (Cal) Rollins, and Christian (Chris) Yurk. Survivors of the immediate family include wife Norma, daughter-in-law Kathy (Brightwell) Gregory, widow of his oldest son, Robert H. Gregory; sons Norman and wife Susan (Harrison) Gregory of Meridian, ID; Charles and wife Debra (Havel) Gregory of Grand Island, NE; and James (Jim) Gregory of Lincoln, NE; seven grandchildren and three great grandchildren. Robert attended school in Cope, CO, Corpus Christi, TX and Hastings, NE. He worked for Western Union as a teletype operator between high school graduation and the time he entered the U.S. Navy in 1942. On June 21, 1942 Robert was united in marriage to Norma Mae Polzel at Smith Center, KS. He enlisted in the U.S. Navy serving from August 21, 1942 to October 25, 1945. He served on the battleship U.S.S. New Mexico, BB-40, in the Fire Control Division. Battle service included Attu, Makin, Kwajalen, Kavieng, Guam, Leyte, Luzon and Okinawa. After his military service he accepted employment with Eller’s Store in Geneva where worked until his retirement in 1990. Robert held lifelong interests in butterfly’s and butterfly collecting, astronomy, photography, and gardening; in short, he loved being outdoors. He supported his sons scouting activities as a Pack and, later, Troop Committee Member. Later in life he became very interested in genealogy, tracing his ancestors back through Indiana to Pennsylvania. Robert loved vacationing in the Rocky Mountains with his family where many special memories were made. He also enjoyed riding the motorcycle where he would take his youngest son, Jim, out for rides when home from Lincoln on weekends. He was a quiet, gentle, humble man who cared deeply about, and for, his family. Robert worked hard all his life. He was a wonderful teacher to his sons; teaching by example to enjoy nature and the world around them; that in so doing one would never lack for things interesting to investigate. He was a member of Congregational Church – United Church of Christ, Geneva, NE.

Memorial services for Robert will be held on Wednesday, February 26, 2014 at 11:00 a.m. at the Farmer & Son Funeral Home in Geneva. Military Rites will follow the memorial service outside the Funeral Home. They will be performed by... View Obituary & Service Information

The family of Robert L. Gregory created this Life Tributes page to make it easy to share your memories.

Memorial services for Robert will be held on Wednesday, February...

Send flowers to the Gregory family.