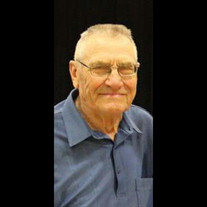 A Funeral Mass for Robbie will be held on Saturday, December 3, 2016 at 10:00 a.m. at St. Mary's Catholic Church in Shickley. Father Scott Courtney will officiate the Mass. Military Graveside Services will be held in the St. Mary's Catholic Cemetery following the Mass. Visitation will be held on Friday from 2:00 p.m. to 5:00 p.m. at Farmer & Son Funeral Home in Geneva. Visitation will also be held at the church 1 hour prior to Rosary. A Rosary will be prayed on Friday, December 2, 2016 at 7:00 p.m. at St. Mary's Catholic Church in Shickley. Memorials are directed to the St. Mary's Catholic Church or the Shickley American Legion. Robert William Grote was born to John and Mollie Grote on August 6, 1934 in rural Shickley. He passed away November 29, 2016 at Bryan East Hospital in Lincoln at the age of 82 years, 3 months and 23 days. He was the youngest of seven children and spent his entire life in the Shickley area. Robbie grew up in Shickley, receiving the sacrament of Baptism on August 12, 1934 along with First Reconciliation, First Communion, and his Confirmation on October 1, 1947 at St. Mary's Catholic Church. He attended country school in rural Shickley through the eighth grade, after which he stayed home to continue working on the family farm. He served in the Army between 1958 and 1960. After the Army, Robbie returned to Shickley and began working at Alf's Well Drilling. Robbie was married to Carol Ann Buell of Cordova on August 7, 1963 and their marriage was blessed with four children, Todd, Kent, Kelli and Kurt. He worked at the grain elevator in Shickley for 39 years. In 1972, he partnered with his brother Gerald and the Biegert Family to purchase Shickley Grain Company. He had a tremendous work ethic, which he passed on to his children. He was an active member of St. Mary's Catholic Church, the Knights of Columbus and the American Legion Post #164 in Shickley. He enjoyed playing cards and taught all of his children, at a very young age, how to play so they could enjoy his favorite pastime, also. He enjoyed playing ball and could often be found at the center of a game in the backyard playing with his kids and grandkids. Robbie never missed many of his kid's events and continued to travel to watch all of his grandkid's activities as well. Family was very important to Robbie and you could tell that by how he spent much of his time. He especially loved being a grandpa. Robbie is survived by his wife, Carol, sister, Margaret Everts of Seward, son, Todd and daughter-in-law Mary of Carmel, IN, son, Kent of Fox Lake, IL, daughter, Kelli and son-in-law Jim Ray of Blair, son, Kurt and daughter-in-law Kristen of Blair, 12 grandchildren, many nieces and nephews and a host of other relatives and friends. He was preceded in death by his parents, John and Mollie Grote, by his brothers, Bernard, Don and Gerald, by his sisters, Eleanor Oates and Mary Olson, and nephews, Fred, Jeff, and Charles Grote.

The family of Robert "Robbie" Grote created this Life Tributes page to make it easy to share your memories.

A Funeral Mass for Robbie will be held on Saturday, December...