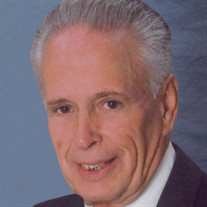 A Funeral Service for Robert was held on Tuesday, October 1, 2019, at 10:30 a.m., at the United Methodist Church in Geneva, Nebraska with Kim Dunker presiding. There were 3 special music selections played during the funeral service, “In The Garden” by Alan Jackson, “Daddy’s Little Girl” by The Shires and “You Are My Sunshine” by Johnny Cash. Casket Bearers included Cody Larsen, Chase Larsen, Travis Betka, Rowdy McAllister and Seve Longoria. Honorary Casket Bearers were Jase Renz, Kolton Betka and Chance Larsen Military Graveside Services were conducted at 2:00 p.m. at the Sutton Cemetery in Sutton, Nebraska on October 1, 2019, by the Nebraska Military Honor Guard for Robert’s service to our country in the United States Navy. Memorials were directed to the family to be designated at a later date. Farmer & Son Funeral Home was in charge of funeral arrangements. Robert “Bob” Leroy Hammond was born to Marion L. Hammond and Myrtle P. (Artrup) Hammond on April 27, 1937, at Edgar, Nebraska, and passed away September 26, 2019, at York General Hospital in York, Nebraska at the age of 82 years, 4 months and 30 days. He was one of 8 children in the family. Robert joined the United States Navy on May 27, 1955, as a Radar Specialist, and was stationed in Long Beach, California. He first served on the ship, Roarke Carrier, and he finished his duty serving on the destroyer ship, E.F. Larson. He then performed his Naval duties on the ground, providing Shore Patrol, until he was honorably discharged on May 14, 1959. Robert was married to Marilyn Fisher of Sutton, Nebraska, on June 14, 1957, and to them 5 children were born. In June of 1959, Bob and Marilyn moved to Caldwell, Idaho, where he worked on a mink farm and worked with Tommy Campbell who taught him the trade of auto body repair. In 1960, Robert moved back to Nebraska where he first worked at the Elevator in Sutton, Nebraska, before taking a job with Murphy Feed as a salesman in Staplehurst, Nebraska in 1962. Robert and Marilyn moved to Exeter, Nebraska after being convinced by Bender & Beecher to open a body shop. This venture started his long career of 45 years in the automotive body shop industry. He had numerous other automotive body shops: Friend Body & Glass, NAPA, and Mr. Automotive and Machine Shop. Later in life, Bob worked to earn his GED and did so in 1985. This led him to a new career path in selling Real Estate with Home Realty, working with his daughter, Pamela for 3 years. In 1995, Robert & Marilyn purchased a family farm near Burress, Nebraska, where Robert followed his passion of farming, until his retirement and his fight with cancer. In August of 2017, they sold their farm to a long time friend, Justin White. In October of 2017, Robert and Marilyn moved to York, Nebraska. Robert was fortunate to have their daughter, Carol, who lives close by be able to be Robert and Marilyn’s caregiver for the last 3 years. Robert’s kind demeanor and caring eyes will forever be remembered. He was a man of many talents, strong willed and as compassionate as they come. He proudly served his country for many years and worked hard to provide for his family. Ask anyone who knew him and they would have nothing but great things to say about him and always ended with, “just a great man!” Robert was preceded in death by his father, Marion Hammond; son, Scott Hammond; brothers, David Lowell and Jim Hammond; brother-in-law, Gene Tucker, Carl ”Charlie” Bartlett; sisters-in-law, Wanda Hammond, Brenda Hammond, Charlene Tucker and Corrine Wolfe; nephew, Thomas Thompson; niece, Debbie (Hammond) Horner; parents-in law, Kenneth & Eleanor Fisher and step-father, Larry Prickett. He is survived by his wife, Marilyn; mother, Myrtle Prickett; daughters, Carol Hammond and life partner, Thomas Coffey, Cheryl and husband Bill Whitaker, Pamela Hughes and husband Dr. L.W. Hughes, Amy Larsen and husband Dr. Lee Larsen; 12 grandchildren, 10 great-grandchildren; sisters, Janice Bartlett, Patricia Gilbertson and husband, Leland, Vicky Childers and husband, James; brother, Jack Hammond and wife, Candida; sister-in-law, Tressa Hammond; brother-in law, Don Wolfe and many nieces, nephews, cousins and friends.

A Funeral Service for Robert was held on Tuesday, October 1, 2019, at 10:30 a.m., at the United Methodist Church in Geneva, Nebraska with Kim Dunker presiding. There were 3 special music selections played during the funeral service, &#8220;In... View Obituary & Service Information

The family of Robert L. "Bob" Hammond created this Life Tributes page to make it easy to share your memories.

A Funeral Service for Robert was held on Tuesday, October 1,...

Send flowers to the Hammond family.