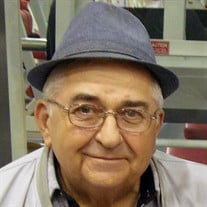 A Funeral Service for Robert was held on Wednesday, October 23, 2019, at the Milligan Auditorium at 10:30 a.m. with Pastor Murry Johnston and Pastor Mark Schutt presiding. There were 4 special songs played during the service, “Hymn Of Promise” by Blake Burroughs, “Amazing Grace” by Susan Boyle, “The Lord’s Prayer by Robert R. Kassik and “I Dreamed A Dream” by Susan Boyle. Casket Bearers included Robert Matthies, Louis Matthies, Jr., Perry Kassik, Paul Kassik, Bryce Kassik and Brent Kassik. Honorary Casket Bearers were Richard Kassik, Dean Filipi, Scott Pinkham, Tom Gillmore, Ethanael Jobman, Carter Muff and Alice Muff. Military Graveside Services were conducted by the Milligan American Legion – HSSK Post 240 in honor of Robert’s service to our country in the United States Army at the Bohemian National Cemetery following the funeral service. Memorials were directed to the family to be designated at a later date. Farmer & Son Funeral Home was in charge of funeral arrangements. Robert Ray Kassik of Milligan passed away unexpectedly at Bryan East Hospital October 19, 2019 at the age of 78. He was born October 2, 1941 to Frank W. Sr. and Emma A. (Suda) Kassik on the Charvat farm a mile and a half west of Milligan. Robert attended Milligan Public School and graduated in 1959. He began work for Farmers Cooperative in Milligan on June 1, 1960. On January 13, 1964 he went into active duty with the army and spent time testing artillery in Germany. He was discharged January 14, 1966, returning to his job at Farmers Cooperative where he continued to serve the patrons. He began his career there in the grain and agronomy departments, driving the propane truck and then moving indoors as assistant manager and then eventually branch manager at Milligan. He was with Farmers Cooperative for 48 years until his retirement in September 2008. He married Marjorie Halama on March 7, 1975 at the Milligan United Methodist Church. To this union, two daughters were born: Karie Lynn and Stacey Jo. He lived his entire life in Milligan serving the community in many ways. He was on the Milligan School Board from 1983 to 1998 and served as secretary. Robert was a lifetime member of the H.S.S.K. American Legion Post 240 in Milligan. In November 2018 he was honored with receiving a Quilt of Valor. He was active over the years pitching for the Milligan men’s softball team. He also enjoyed golfing but especially loved his bowling. Bob and Marge bowled with others on mixed leagues and he looked forward to bowling on Wednesday nights with the guys on the Kassik Milling bowling team. On December 29, 2000 he bowled a perfect 300 game at Friendly Lanes in Friend, believed to be the first in the alley’s history. He also enjoyed playing poker especially at the annual Suda Christmas gathering the first Sunday in December. He was nicknamed “Vejce” (the Czech word for eggs) by his friends because following a night out with the guys he always told everyone to go to the Hilltop Café for “vejce.” He enjoyed spending his spare time doing jigsaw puzzles and playing computer games. Robert was blessed with a beautiful singing voice and begun singing for funerals and weddings while he is in high school and continued to do so for many people and their special events. He would sing songs in the Czech language as requested and continued singing for people almost 50 years. Bob and Marge enjoyed attending all of Ethan’s school and church activities, basketball games, baseball games and 4-H events. Ethan and Grandpa were close referring to each other as “best buddy” while Ethan’s classmates affectionately referred to Bob as “Grandpa Fedora.” Bob and Marge also enjoyed babysitting and being able to spend much quality time with Carter and Alice. He was very proud of his three grandchildren. Everyone has always expressed how positive he was, never seeing him without a smile on his face and a friendly greeting or visit for all. Robert was preceded in death by his parents Frank W. Sr. and Emma A. (Suda) Kassik, sister and brother-in-law Eleanor and Louis Matthies; brothers Donald Kassik and Frank W. Kassik Jr.; father-in-law and mother-in-law Joseph and Evelyn Halama; infant niece Joy Matthies. Survivors include: his wife of 44 years, Marjorie of Milligan; daughter Karie Jobman of Beatrice; daughter and son-in-law Stacey and Jim Muff of Crete; grandsons Ethanael Jobman and Carter Muff; granddaughter Alice Muff; sister-in-laws Nori Kassik of Lawton, OK; sister-in-law Margaret Kassik of Milligan; cousin Richard (Judy) Kassik of Milligan; nieces Mary Jo Fountain of Lawton, OK, Kathy (Tom) Gillmore of Lincoln, Karen (Dean) Filipi of Milligan, Karla Kassik of Lincoln, Lorie Ann (Scott) Pinkham of Minden; nephews Paul (Jeannie) Kassik of Shickley, Perry (Judy) Kassik of Friend, Louis Matthies of Geneva, Robert (Janet) Matthies of Hastings; and by many cousins and friends.

A Funeral Service for Robert was held on Wednesday, October 23, 2019, at the Milligan Auditorium at 10:30 a.m. with Pastor Murry Johnston and Pastor Mark Schutt presiding. There were 4 special songs played during the service, &#8220;Hymn Of... View Obituary & Service Information

The family of Robert R. Kassik created this Life Tributes page to make it easy to share your memories.

A Funeral Service for Robert was held on Wednesday, October 23,...