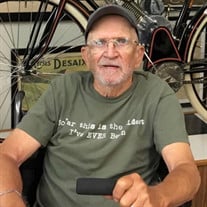 A Funeral Mass for Bob was held on Tuesday, October 19, 2021 at 10:30 a.m. at Sacred Heart Catholic Church in Hebron, Nebraska. A Rosary was prayed at 10:00 a.m. at the Church prior to the Mass. Father Steve Major presided over the Services. Carlece Kenner was the organist and Kurk Weidel was the cantor and they led the congregation in the singing of "Amazing Grace," "Here I Am Lord," "On Eagle's Wings," and Be Not Afraid." Pallbearers for the service included Mike Puncochar, Tim Puncochar, Mary Budde, Barb Olsufka, Larry Buhrman, and Lance Buhrman. Honorary Pallbearers were Sandi Buhrman, John Kowalski and Sue Kowalski. A Graveside Service with Military Honors was held at the Carleton City Cemetery following the Funeral Mass. Honor were provided by the Carleton American Legion and the U.S. Navy Honor Guard. Memorials are suggested to the Wounded Warrior Project or the National Wildlife Federation. Robert Lee Kowalski was born to John Roman Kowalski and Anna Tekla (Curtis) Kowalski on April 7, 1933 in Elba, Nebraska. He passed away on October 14, 2021, at Bryan Medical Center West in Lincoln, at the age of 88, 6 months and 7 days. Bob graduated from Elba High School in 1951. After school, he joined the Navy and served for 4 years in the Naval Construction Battalion in Subic Bay in the Philippines. He was very proud to serve his country as a Seabee. After his time in the military, he returned home and attended the University of Nebraska-Lincoln for two years. He married the love of his life, Loretta Neville, on August 24th, 1963 in York, Nebraska. The couple started their married life in Saint Paul, and then moved to a small acreage near Alda, shortly after, Bob started at New Holland, where he worked for 27 years as a machinist. Bob was very proud to have built the home (Alda Ranch) in which he and Loretta raised their four children. Bob enjoyed reading, traveling, spending time with his family and working on his yard. His greatest joy in life was being husband, Dad and Grampy. He made it to almost every game, fair, or school activity of his children and grandchildren. He and Loretta also enjoyed many years of traveling to Nebraska football games with friends. To friends and family, he was known as Blackcloud, B.O.B, Grampy, and Bobcat. After retiring early, Bob and Loretta began a new adventure as winter Texans. They enjoyed 19 years traveling south, making many friends and wonderful memories. In 2000, they sold the Alda house and moved to rural Red Cloud, where they spent the next 21 years on their “ranch”. He was preceded in death by his parents; brothers Don, John (Butch), and Dean; and infant sons Lee and Christopher. He is survived by his beloved wife of 58 years, Loretta Kowalski, of Carleton, Nebraska; children Kate (John) Lange of Bruning, Nebraska, Joni (Jerry) Johnson of Hebron, Nebraska, Kevin (Kris) Kowalski of Wilber, Nebraska, ,Laurie (Allan) Grell of Omaha, Nebraska; grandchildren Jared, James, and Samantha Lange, Claire and Rachel Johnson, Garrett, Wyatt, and Cassidy Kowalski, Josh Walsh, Alyssa, Hannah, and Ryan Grell; and great-granddaughter, Journee.

A Funeral Mass for Bob was held on Tuesday, October 19, 2021 at 10:30 a.m. at Sacred Heart Catholic Church in Hebron, Nebraska. A Rosary was prayed at 10:00 a.m. at the Church prior to the Mass. Father Steve Major presided over the Services.... View Obituary & Service Information

The family of Robert L. "Blackcloud" Kowalski created this Life Tributes page to make it easy to share your memories.

Send flowers to the Kowalski family.