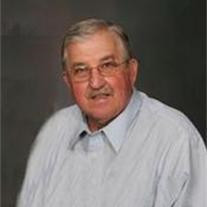 Robert Dale Krupicka was born to Lester Franklin Krupicka and Wilma Stych Krupicka on December 7, 1948 at Fairbury, Nebraska, and passed away September 19, 2011 at home in Tobias, Nebraska, at the age of 62 years 9 months and 12 days. He was one of four children in the family. Robert was born in Fairbury and raised on the farm outside Tobias. From 1970 to 1979 he and his family lived in Daykin. In 1979 Robert and his family resided at the farm Southwest of Tobias until the present. Robert attended school in Tobias through the eleventh grade. In 1968 he was part of the first graduating class of Meridian High School. He worked with his brother Larry at Carleton Motor's for a couple years and then began farming when he moved back to the homestead in 1979. He continued farming until 1992 when he went to work for American Tool and M-C Industries, until he retired in 2010. Bob was married to Bonnie Jean Brennan of Lincoln, NE on May 31, 1970 and to them two children were born. Bob enjoyed taking care of his farm, keeping it just perfect. His hobby was bringing old classic cars back to life. His love was his family, wife, children, their spouses and grandchildren. His greatest interest was studying the scriptures and was baptized as one of Jehovah’s Witnesses in 1981. He served as an elder in the Fairbury Congregation for some 20 years. Throughout his life he always gave and never asked back. He meant a great deal to so many and will be missed. Bob was proceeded in death by his parents, Lester and Wilma Krupicka and father-in-law Merrill Brennan. He is survived by his wife Bonnie, son Shawn and wife Sonia, grandchildren Cala, Cordel, Ethan and Eian. His daughter Traci and husband Vincent Perez, along with grandchild Gabriella, all of Fairbury. Brother Larry and wife Laura of Carleton, nieces Jody and husband Scott Houck of Strang, Susan and husband William Jr. Linton of Hebron and Nancy and husband Jeff Krehnke of Bruning. Brother Don and wife Kathy of Milligan, nephews Jeff and wife Katy of Hebron, Greg of Ohiowa, Eric and wife Jenny of Hebron and nieces Kelly and husband Curt Mumm of Hebron and Michaela Krupicka of Hebron. Twin brother Ron and wife Carol of Carleton, nieces Sheri and husband Ted Norder of Bruning, Lori and husband Tony Woodcock of Ames, IA and nephew Ryan and wife Rachel of Cortland, NE. Funeral services for Robert will be held at the Tobias Gymnasium on Friday, September 23, 2011 at 10:00 a.m.. Interment will be in the Tobias City Cemetery. Visitation will begin Thursday at 1:00 p.m. until 8:00 p.m. with family greeting friends from 6:00 to 8:00 at the Farmer & Son Funeral Home - Kotas Chapel in Milligan, Nebraska. Memorials are directed to the family.

Robert Dale Krupicka was born to Lester Franklin Krupicka and Wilma Stych Krupicka on December 7, 1948 at Fairbury, Nebraska, and passed away September 19, 2011 at home in Tobias, Nebraska, at the age of 62 years 9 months and 12 days. He was... View Obituary & Service Information

The family of Robert D. Krupicka created this Life Tributes page to make it easy to share your memories.

Robert Dale Krupicka was born to Lester Franklin Krupicka and...