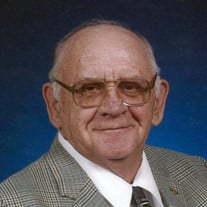 A Funeral Service for Robert was held on Thursday, September 12, 2019, at 10:30 a.m., at Farmer & Son Funeral Home in Geneva, Nebraska with Pastor Doug Griger & Kim Dunker presiding. There was one special recorded song during the service, “In The Garden” by Jim Reeves. Pallbearers included John Janing, Mike Janing, Mark Nieveen, Mel Naiman, Matt Nieveen and Brian Nieveen. Military Graveside Services were held at the Geneva Public Cemetery following the funeral service. The Geneva VFW – Samuel J. Marsh Post 7102 and the Nebraska Military Honor Guard conducted military honors for Robert for his service in our United States Army. Memorials were directed to the Geneva Volunteer Fire Department or The United Methodist Church. Farmer & Son Funeral Home was in charge of funeral arrangements. Robert William Lauenstein was born October 17, 1935, to Edward and Alma (Lentfer) Lauenstein. He was the fourth of five children. He passed away at the Blue Valley Lutheran Home in Hebron, Nebraska on September 9, 2019, at the age of 83 years 10 months and 23 days. Bob grew up on the family farm five miles west of Geneva, going to country school and a year at Shickley Public School. He took the 8th grade and catechism at Grace Lutheran School in Geneva, being confirmed at that time. Bob helped his dad and brother with farming for several years and then found employment with Alf’s Irrigation in Shickley. He enlisted in the United States Army on March 13, 1957 serving 19 months in Germany. He was Honorably Discharged on March 9, 1959. While serving he gained marksman status in light machine gun, automatic rifle and M-1 rifle. He also received the good conduct medal. Upon returning home he met the love of his life and best friend, Caroline Janing. They were married on August 23, 1959. Bob worked construction the first 10 years of their marriage, then moved to Bruning to continue working in construction for several years. He then found himself farming again and a new venture, driving a semi-truck all over Nebraska and Kansas. In 1986 Bob started working for Thayer County Department of Roads and held that job 19 years until his retirement in 1997. Through the years he and Caroline fished and traveled, when time allowed. Hunting was always something he enjoyed doing. With his health failing Bob entered the Blue Valley Lutheran Home in Hebron, Nebraska on January 2, 2017. He is preceded in death by his parents; brothers, Clarence, Harold and Don Lauenstein. He is survived by his wife, Caroline; sister, Elaine Schmidt and family; many nieces and nephews and their families and a host of friends.

A Funeral Service for Robert was held on Thursday, September 12, 2019, at 10:30 a.m., at Farmer & Son Funeral Home in Geneva, Nebraska with Pastor Doug Griger & Kim Dunker presiding. There was one special recorded song during the service, &#8220;In... View Obituary & Service Information

The family of Robert W. Lauenstein created this Life Tributes page to make it easy to share your memories.

A Funeral Service for Robert was held on Thursday, September...

Send flowers to the Lauenstein family.