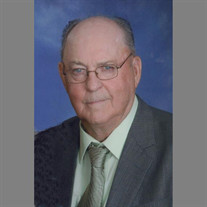 Funeral services for Robert Dean will be on Monday, January 4, 2016 at 11:00 a.m. at the United Methodist Church in Geneva. Pastor Michelle Gowin will officiate the service. Public graveside services will be held on Monday, January 4, 2016 at 2:00 p.m. at the Geneva Public Cemetery. Visitation will be on Sunday from 1:00 p.m. to 8:00 p.m. with family greeting friends from 5:00 p.m. to 7:00 p.m. at the Farmer & Son Funeral Home in Geneva. Memorials are suggested to the American Heart Association or the Geneva Public Cemetery. Robert Dean Lovegrove was born to George Edward Lovegrove and Alice Mae Ainsworth Lovegrove on March 10, 1929, at Geneva, Nebraska, and passed away December 31, 2015 at Heritage Crossings in Geneva, Nebraska, at the age of 86 years, 9 months, and 21 days. He was one of four children in the family. Robert Dean attended District 14 country grade school and graduated from Geneva High School in 1946. He lived on the family farm northwest of Geneva until he married Shirley Lee Dyer of Exeter, Nebraska, on September 1, 1950 and they moved three miles north of the family farm. In October of 1951, he entered the Army serving in the Korean War until October of 1953. Robert Dean and Shirley lived in their first house until they moved into their new home across the road in 1963. To this union three sons were born: Jim, John and Bob. His love for farming started at an early age. At the age of 9 or 10 he plowed with a steel-wheeled John Deere GP tractor while his dad and brother were following the wheat harvest. After school, he would hitch-hike to where his dad was picking corn and by the time he was 15, he was transporting harvest equipment. Robert Dean, along with his brother and father, followed harvest from Texas to Canada and owned a wheat farm in South Dakota - this was the favorite time of his life. They followed harvest until 1957 when they started irrigating on the farm. Early in 1958, Robert Dean started BH&L Grain Co. in Grafton, Nebraska, along with his brother, Dale, brother-in-law, Keith Burt, and other partners. Robert Dean farmed until 1984 when his three sons took over the family farming operation. He enjoyed driving around watching his sons farm and giving a few suggestions. After retirement, he became a full-time antique John Deere tractor collector. He traveled coast to coast searching for the “best deal.” He was a regular at swap meets and auctions until November 2015 and for every tractor in his collection he could recall with ease when and where he bought it, for how much and its serial number. He made many life-long friendships through his collection and excursions. Not a day went by that Robert Dean didn’t have a story, new or old, about the wheat harvest or his tractor collecting adventures. Robert Dean was preceded in death by his parents, George and Alice Lovegrove, his brother Dale Lovegrove, sisters Lila Bettger and Marjorie Burt, and brother-in-law Keith Burt. He is survived by his wife of 65 years, Shirley Dyer Lovegrove of Fairmont, NE; his three sons and daughters-in-law: Jim and Paula Lovegrove of Fairmont, NE, John and Patrice Lovegrove of Fairmont, NE and Bob and Vicki Lovegrove of Grafton, NE; his seven grandchildren Lisa Finkner and husband John of Roca, NE, Justin Lovegrove and wife Alecia of Lincoln, NE, Christin Lovegrove of Geneva, NE, Brandon Lovegrove and wife Holli of Geneva, NE, Jenni Hoarty and husband Dustin of Fairmont, NE, Ashley Risseeuw and husband Dan of Fairmont, NE, and Bobbi Baumann and husband Aaron of Grafton, NE; his 12 great grandchildren Hailley, Merritt and Sienna Finkner, Olivia and Emily Lovegrove, Sloan Lovegrove, Lauryn and Hayden Lovegrove, Brooks and Blakely Hoarty, Donavon Risseeuw and Drake Baumann; his brother-in-law, Robert Bettger, sister-in-law Jean Lovegrove, and brother-in-law Sterling Dyer and his wife Sharon as well as many nieces, nephews, cousins and friends.

The family of Robert Dean Lovegrove created this Life Tributes page to make it easy to share your memories.

Funeral services for Robert Dean will be on Monday, January 4,...