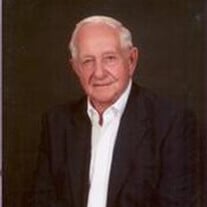 Robert M. Schelkopf was born January 9, 1928, to Isaac Schelkopf and Lena (Schrock) Schelkopf. He passed away on July 17th, 2012 at Heritage Crossings in Geneva. He was 84 years old. Robert was the second of 8 siblings. He grew up on the family farm that was homesteaded by his grandfather, Martin L. Schelkopf. He attended grade school at District 93 and graduated from Geneva Public Schools with the class of 1945. After spending 1951-1953 in the U.S. Army, he returned home to marry his sweetheart, Elizabeth Ann Abbott, and join his father in running the family farm. At the time, they were feeding 75 head of cattle. Robert and Elizabeth were married February 8, 1953. They were blessed with two children, Sherri Lea and Robert Shane Schelkopf. The family attended the Shickley United Methodist Church until moving to Geneva in March of 1967. At that time, they joined the Geneva United Methodist Church. By 1974, the cattle operation had grown to well over 3,000 exotics, making it the largest exotic cattle breeding herd in the nation. Robert was President of Cornhusker Cattle Co. and Vice President of Cornhusker Agriculture Association which was known nationally for its SPF Swine herds. He also served on the R.E.A. board. Robert’s success was not by chance. When Robert would talk, people would listen. He kept to his word and what he said went… except when it came to Betty! After Shane’s passing in April of 1980, Robert discontinued his business with cattle and focused on crop production. In 1989, Robert formed SSR Land Company with his daughter, Sherri and his brother, Stanley. Robert never retired as co-owner/operator of SSR, only becoming too ill to work within the last year of his life. Robert enjoyed spending time with his family, spending the winters in Florida with his wife, playing cards at the VFW, and was an active member of the Geneva Lion’s Club. He was also an avid Husker fan and especially enjoyed tailgating with Dawne Hedden, family, and friends. Robert was loved, honored, and respected. He showed kindness to others regardless of any personal gain and he was admired for it. Robert always made sure that everyone he cared for was taken care of. He had always been proud of his family, his business, and his community. He would not boast of his own accomplishments, but would rather reminisce with family and friends. He is survived by his daughter, Sherri and Don Severance of Lincoln, NE; his grandson, Jonathan and Bailie Miller of Harrisburg, SD; his granddaughter, Shayna Miller of Lincoln, NE; his brother, Sterling Schelkopf of Long Pine, NE; his brother, Stanley and Donna Schelkopf of Geneva, NE; his sister, Sharol and Dewain Cisney of Tempe, AZ; his sister-in-law, Bernice Schelkopf of Sycamore, IL; his former sister-in-law, Beverly Schelkopf-Epp of Henderson, NE; and his special friend, Dawne Hedden of Geneva, NE. He was preceded in death by his parents; his wife, Elizabeth; his son, Shane; his sister, Mary Wythers; and his brothers, Conly, Dean, and Russell. Funeral services for Robert were held on Saturday, July 21, 2012 at 10:30 a.m. at the United Methodist Church in Geneva with Kim Dunker officiating. Nancy Jo Galusha accompanied Shelbi Palensky in the singing of “How Great Thou Art” and “On Eagles’ Wings.” She also accompanied the congregation in the singing of “Amazing Grace.” Pallbearers for the service included Jonathan Miller, Mike Schelkopf, Scott Schelkopf, Kurt Schelkopf, Mark Wythers, and Mike Kempf. Honarary bearers included Shayna Miller, Bailie Miller, Rowen Kempf and Ronald Labenz. Interment for Bob was held in the Geneva Public Cemetery. Memorials are directed to the United Methodist Church in Geneva. Farmer & Son Funeral Home was in charge of arrangements.

Robert M. Schelkopf was born January 9, 1928, to Isaac Schelkopf and Lena (Schrock) Schelkopf. He passed away on July 17th, 2012 at Heritage Crossings in Geneva. He was 84 years old. Robert was the second of 8 siblings. He grew up... View Obituary & Service Information

The family of Robert "Bob" M. Schelkopf created this Life Tributes page to make it easy to share your memories.