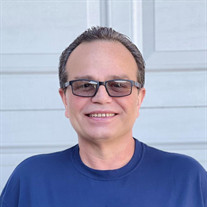 A Graveside Service for Robert will be held on Monday, July 5, 2021 at 11:30 a.m. at the Tobias City Cemetery with Tom Ostler presiding. No Public Visitation will be held. Memorials are to be directed to the Tobias City Cemetery. Robert William Morales was born to Lois Marie Laun on June 7, 1964 at 11:31 am, and passed away on June 15, 2021 in Webster, Harris County, Texas at the age of 57. He was one of two children in the family. Robert grew up in Manhattan, Kansas where he graduated from high school. He spent most of his adult life in or near the Kansas City area until moving to Las Vegas in 2016 to live near family. Robert was married in September of 1991 to Catherine Paige Stockstill in Manhattan, Kansas. Robert started working in his early teens as a dishwasher and worked his way into cooking which he enjoyed. Although he did not continue to work as a cook beyond a few years he continued to take pleasure in cooking meals and enjoying good food. He learned to build cabinets, remodel homes and businesses, install windows and doors, and working with wood. He took pride in making things look beautiful. His last years were spent as a traveling carpenter where he was valued and trusted for his work. Robert enjoyed watching TV and movies, adding components to his computer, cooking for and with friends, going out on the town alone or with friends, and trips to Home Depot. His favorite show, which he never liked to miss was Oak Island. Even though he moved around he always kept in touch with his friends and frequently called them while out on the road and meeting up whenever possible. He was a good friend and valued the friendship. Robert was a great friend to his sister when he visited often during breaks from his work on the road. He was a great advocate and support and an enjoyable companion. The adventures in cooking, shopping, problem solving and the shared memories will be missed. Robert was preceded in death by his wife Paige. He is survived by his sister, Ricki Ostler; brother-in-law, Thomas Ostler; niece, Rachel Ostler; niece, Lara Ostler and cousin, Rebecca Griffin. He will be missed by his family and friends.

The family of Robert W. Morales created this Life Tributes page to make it easy to share your memories.

A Graveside Service for Robert will be held on Monday, July 5,...

Send flowers to the Morales family.