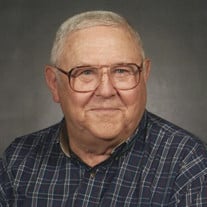 Funeral service for Robert "Duke" Rischling will be 10:30 a.m. Monday, February 16, 2015 at the Milligan Auditorium in Milligan, Nebraska. Military graveside service will follow at the Bohemian National Cemetery in Milligan. Visitation will be Sunday from 1 pm until 8 pm with family greeting friends from 6 to 8 at the Farmer & Son Funeral Home - Kotas Chapel in Milligan. Memorials are directed to the Milligan Rescue Unit, Milligan Fire Department or the Milligan American Legion. Robert Richard (Duke) Rischling was born on April 12, 1926, to Adolph and Mary (Kratina) Rischling northeast of Tobias, NE. He passed away on February 11, 2015 in Lincoln, NE. Bob lived with his family on a farm south of Milligan and attended Milligan Public school. He graduated in 1943 from Milligan High School and worked at the Bruning Air Base and farmed with his father. In September of 1944, Bob entered the army and was stationed in the Pacific Theater until September 1946. He joined the American Legion Post #240 and was in charge of the firing squad for over 60 years. He was a lifetime member of the Veterans of Foreign Wars Post 7102 in Geneva. Bob started working for his uncle, Henry Rischling, in the grain elevator business in Milligan, after the war. He worked in elevators in Milligan, Tobias, and Western, NE. He retired from the grain business in 1991. Bob enjoyed hunting and fishing, and morning coffee with friends. He enjoyed watching sporting events and supporting the Roosters/Timberwolves, Cornhuskers, Bobcats, Yankees, and Cubs. Bob enjoyed listening to polka music and going to dances. He looked forward to summer festivals in Milligan and Wilber. He enjoyed gardening and mowing lawns through-out his lifetime. Bob gave his time to the Milligan Volunteer Fire Department and the Milligan Village Town Board. Bob was married to Carolyn Naimon on June 15, 1968, at the Geneva Methodist Church and they lived in Milligan. They have a son, Ryan and a daughter Marci. Bob is survived by his wife, Carolyn, son and wife, Ryan and Teresa Rischling of Bennington, NE, daughter and husband, Marci and Dustin Stewart of Atlanta, NE. Grandchildren are Austin, Riley, and Jackson Rischling of Bennington and Hanna and Carly Stewart of Atlanta, NE. Brother and wife Richard and Kathryn Rischling of Milligan, sister and husband, Irma and Albin Kudlacek of Geneva, NE, and sister Alma Placek of Milligan, NE. Brother-in-law and wife, Verlyn and Lois Naimon of Geneva and sister-in-law, Elaine Korbelik of Milligan. Aunt Vera Rezac of Omaha, and many cousins, nieces, nephews, and friends. Bob was precede in death by parents Adolph and Mary Rischling, sister, Arlene Luzum, brothers-in-law Dean Placek, James Luzum Jr, and Ron Korbelik, nephews, Paul Placek and Jay Luzum, and niece, Kim Luzum.

Funeral service for Robert "Duke" Rischling will be 10:30 a.m. Monday, February 16, 2015 at the Milligan Auditorium in Milligan, Nebraska. Military graveside service will follow at the Bohemian National Cemetery in Milligan. Visitation will... View Obituary & Service Information

The family of Robert R. "Duke" Rischling created this Life Tributes page to make it easy to share your memories.

Send flowers to the Rischling family.