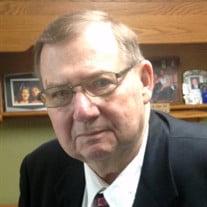 A Memorial Service for Bob was held on Saturday, January 4, 2020, at 10:30 a.m., at The United Methodist Church in Davenport, Nebraska with Pastor Mike Anderson & Pastor Martin Leeper presiding. There were 3 recorded music selections played for Bob's service and they were, "My Heart Will Go On" by Celine Dion, "See You Again" by Carrie Underwood and "Bridge Over Troubled Water" by Simon And Garfunkel. Private Family Burial of Ashes will be held at a later date. Memorials were directed to the Davenport Rescue Unit. Robert L. Stofer was born December 11, 1943 in Fairbury, NE and passed away December 17, 2019. He celebrated his 76th birthday with his family 6 days before his death. Bob was the son of Antone L. and Phyllis (Smith) Stofer of Carleton, NE. Bob's father was stationed in Africa and while there he suffered from an appendicitis attack. Following unsuccessful surgery on a hospital ship, Antone was sent home to Carleton, NE where he passed away from complications. Following his death, Phyllis moved Robert and his sister Lois to live with her father-in-law in Belvidere, NE where Bob started elementary school. Later, Phyllis met and married Jack Blunk and they resided in Carleton. Two more children were born to this marriage, Jacky and Janet Blunk. Bob finished elementary and middle schools in Carleton, NE and graduated from Bruning High School, class of 1962. Following high school, he attended Milford Trade School and graduated with an associate degree in diesel mechanics. Robert married Kathryn Bunner in 1966 and two girls were born of their marriage, Tamara and Jeanne. Bob took over the insurance agency from Don Miller at Jennings State Bank in January 1967. He was the local independent insurance agent loyally serving many generations of customers—all of them friends—for 46 years. During this time, Bob was a passionate member of the town board for 12 years and served as town chairman for many of those years. He was also active in Lions Club, Masonic Lodge and the Tehama Shrine Scottish Rite. For countless years he was a dedicated member and driver on the Davenport Volunteer Rescue and Fire Department team. He belonged to the Davenport United Methodist Church where he served as treasurer for many years and faithfully mowed the church and parsonage lawns for even more years. For numerous Christmases, he dressed up as Santa Claus for the children in Edgar and Davenport, filling out the Santa suit naturally and perfectly. He truly enjoyed asking each child if they had been good that year, listening to them tell him what was on their Christmas list, and handing them a sack full of peanuts, candy and an orange. On June 14, 1987 Bob married Gwyndolin R. Swenson at the Lovewell State Lake chapel. Two step-sons were included in the family, Kirk and Eric Swenson. For many years Bob and Gwyn's lives revolved around boating, fishing and enjoying their cabin on Lovewell Lake every weekend and golfing everywhere and as often as they could. They especially enjoyed their years playing couples league at the Nelson golf course and traveling to play on many courses in other states. Bob was a life-long Thayer county resident, never knew a stranger and will be remembered and missed dearly by countless friends and his loving family. He was preceded in death by his father, Antone Stofer and his step-father and mother, Jack and Phyllis Blunk. He is survived by his wife of 32 years Gwyn Stofer of Davenport, daughters Tammie Wall of Ashland, NE and Jeanne Tool of Kearney, NE, grandchildren Cassidy, Hayden and Katie Wall of Ashland, NE and Trista Tool of Kearney, NE; step-sons Kirk Swenson of Culver, Ks and Eric (Dodie) Swenson of Wichita, KS, their children TJ Swenson of Salina, KS, Kyla Allenbach of Moundridge, KS, Kieryn Swenson of Dallas, TX, Kameron and Konner Swenson of Pittsburg, KS. His beloved dogs Jethro and Ellie May will deeply miss napping on his lap and sharing his recliner with him.

The family of Robert L. Stofer created this Life Tributes page to make it easy to share your memories.