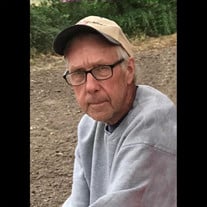 Rodney Lee Barney was born to Don and Iola (Moell) Barney on September 14, 1953 at Geneva, Nebraska and passed away February 18, 2021 at the Fillmore County Hospital in Geneva Nebraska at the age of 67 years, 5 months and 4 days. He was one of 5 children in the family. Rod grew up in Shickley and was baptized and confirmed at the Methodist Church. He attended Shickley Public Schools graduating with the class of 1972. He excelled in track qualifying for state all 4 years in the hurdles. During high school, Rod worked at the Shickley airport and took pride in maintaining the airplanes starting his lifelong fascination with aircraft. Everyone in high school had a nickname and Rod’s was ‘Grandpa’ which turned out to be his favorite role in life. Rod was married to Rene’ Lefever, his high school sweetheart, on May 10th 1975 and to them 2 sons were born. From an early age Rod was a creator and builder often making something from nothing. He was never afraid to tackle any project no matter how difficult. Purchasing the old Methodist Church in Shickley he single handedly tore it down and salvaged the lumber that later became the new home that he built for his family. He had a fascination with how things worked which led to experimenting with everything from wind and solar energy to creating an electric car. He enjoyed coming up with clever creations such as a fairy house in the hollowed tree to the treasure map scavenger hunt leading to the hand-crafted treasure chest somewhere on the farm. Rod collected K-B series International trucks for decades. His dad used this type of truck in a well drilling business and Rod wanted to preserve that memory. His collecting led to many adventures across the state with his sons. Rod always enjoyed time with his family through the martial arts. Whether teaching a class or his boys at home he had a special way of connecting with his students. He became a black belt instructor especially enjoying preparing kids for sparring competition. Many weekends were spent together traveling to Tae-kwon-do tournaments in the region. Beekeeping became a passion after he was the recipient of an inherited hive that he reluctantly accepted. Like everything he took on, he taught himself how to handle bees and harvest honey for his family and friends. His young sons followed by his grandchildren were taught how to respect bees by being hands on, some more enthusiastic than others. He also enjoyed helping others get started with the hobby. Rod devoted his life to his family. He was selfless. A quiet man, Rod strived to make the lives of those he loved comfortable and fulfilling. Rod was preceded in death by his father Don Barney, brother David Barney, father-in-law Wayne Lefever and mother-in-law Pat Lefever. He is survived by his wife of 45 years Rene’; mother Iola Barney of Shickley; sons Shawn(Amanda)Barney of Strang and their children Elizabeth(Connor)Russell of Clarksville Tennessee, Kennedy, Aliviah and AJ of Strang; Brandon Barney and daughters Brianna and Natalee of Hickman; Sisters Donna Rosener of Breckenridge Colorado and Melodie(James)Spurling of Shickley; brother Steve(Cindy)Barney of Bloomfield; brother-in-law Craig Lefever of Tucson, Arizona and many nieces and nephews. A Memorial Service for Rod was held on Tuesday, February 23, 2021 at 10:30 a.m. at the United Methodist Church in Geneva, Nebraska. Pastor Doug Griger officiated the Memorial Service. Melissa Houchin accompanied the congregation in the singing of “Amazing Grace” and “How Great Thou Art.” A Graveside Committal of Ashes was held in the Geneva Public Cemetery following the Memorial Service. Farmer & Son Funeral Home was in care of the arrangements and online condolences can be left at www.farmerandsonfuneralhome.com Memorials are suggested to the family for future designation.

Rodney Lee Barney was born to Don and Iola (Moell) Barney on September 14, 1953 at Geneva, Nebraska and passed away February 18, 2021 at the Fillmore County Hospital in Geneva Nebraska at the age of 67 years, 5 months and 4 days. He was one... View Obituary & Service Information

The family of Rod Barney created this Life Tributes page to make it easy to share your memories.

Rodney Lee Barney was born to Don and Iola (Moell) Barney on...

Send flowers to the Barney family.