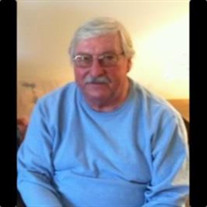 Rodney Paul Kudlacek was born September 7th, 1948 to Albin G. and Edith M. (Novacek) Kudlacek in Shelby, Nebraska. He passed away at the Fillmore County Hospital in Geneva, Nebraska on Sunday, April 25, 2021 at the age of 72 years, 7 months, and 18, days. The family moved to Milligan, Nebraska in 1951 and then to Grafton, Nebraska in 1959. He attended elementary school in Grafton and high school in Fairmont, where he graduated in 1966. Rod joined the Navy in March of 1968 and served through November of 1970 aboard the armed forces courier USS Jamestown AGTR-3. The ship had top secret clearance to wrap, handle and deliver classified materials to various locations in Vietnam as well as being routed to Washington, D.C. National Security Agency at the Pentagon. He was discharged at the rank of 3rd Class Petty Officer CTA3. Rod returned to Grafton and worked in the grain business at BH&L with his father. He later worked at Wynne Transport as a dispatcher for over 30 years. In 1973, Rod married Lea Wach. To this union two children were born: Petra Marie in 1979 and Perry Christopher in 1982. Rod became a Grandpa in February of 2000 to Triston and again in December of 2012 to Dexter. Rod was a former member of the Grafton Village board, Grafton Volunteer Fire Department, and a lifelong member of St. Helena’s Catholic Church. He was also a member of the Samuel J. Marsh Geneva VFW post #7102, where he served on the board as Quartermaster. He thoroughly enjoyed the comradery of his friends and fellow veterans at the VFW club. He enjoyed hunting, fishing, Nascar Races and spending time with his grandsons. Rod was preceded in death by his mother Edith (Novacek) Kudlacek; many Kudlacek aunts and uncles; and many Novacek uncles and cousins. He is survived by his wife Lea; daughter Petra (Michael) Robinson and son Triston of Olathe, Kansas; son Perry and his son Dexter of Thurman, Iowa; father Albin (Irma) Kudlacek of Geneva, Nebraska; brother Gary (Marilyn) Kudlacek of Grafton, Nebraska; Aunt Gladys Hladik of Columbus, Nebraska; sister-in-law Sandy (Jake) Allen of Olathe, Kansas; brother-in-law Sandy Wach of Lincoln, Nebraska; nieces, nephews, and many cousins. A Funeral Mass for Rod was held on Friday, April 30, 2021 at 10:30 a.m. at St. Helena Catholic Church in Grafton, Nebraska. A Rosary was prayed prior to the Mass. Father Michael Zimmer officiated the services. Deb Hoarty accompanied the congregation in the singing of “How Great Thou Art,” “One Bread, One Body,” “Be Not Afraid,” and “Mine Eyes Have Seen The Glory.” Pallbearers for the service included Tom Hiatt, Tom Trumble, Jeff Trumble, Dick Hoarty, Chris Whitesell, and Sandy Wach. Honorary Honorary Pallbearers included Paul Morgison, Dwayne Kudlacek, Ervin Ochsner, Stan Tatro, Carl Schaldecker, and Andrew Trumble. A Graveside Service with Military Honors was held in the Holy Cross Cemetery, Grafton, Nebraska, following the Funeral Mass. Military Honors were performed by the Samuel J. Marsh Geneva VFW Post 7102 and the Navy Honor Guard. Memorials are suggested to the St. Helena Catholic Church or the Samuel J. Marsh Geneva VFW Post 7102. Farmer & Son Funeral Home was in care of the arrangements and online condolences can be left at www.farmerandsonfuneralhome.com

Rodney Paul Kudlacek was born September 7th, 1948 to Albin G. and Edith M. (Novacek) Kudlacek in Shelby, Nebraska. He passed away at the Fillmore County Hospital in Geneva, Nebraska on Sunday, April 25, 2021 at the age of 72 years, 7 months,... View Obituary & Service Information

The family of Rod Kudlacek created this Life Tributes page to make it easy to share your memories.

Send flowers to the Kudlacek family.