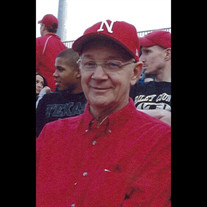 Rodger Dean Anderson was born to Melvin and DeVee (Weiss) Anderson on April 17, 1941 in Geneva, Nebraska and passed away on March 20, 2017 at Fairview Manor in Fairmont, Nebraska at the age of 75 years, 11 months, 3 days. Rodger grew up on the family farm and graduated from Geneva High School with the class of 1959. After high school, Rodger joined the Army National Guard out of York, Nebraska and served his country for four years with one of those years under active duty in the Cuban Missile Crisis. Rodger was married to Roine R. Heath on September 20, 1964 and to this union 3 boys were born: Rodney in 1966, Ronald in 1967, and Larry in 1970. Rodger and Roine lived and farmed in the Fillmore County area. Rodger was also 60-year member of the United Methodist Church in Geneva. Rodger was preceded in death by his parents; wife, Roine; sons Rodney and Ronald; and brother-in-law Ronald Heath. He is survived by his son Larry of Phoenix; brothers Bernard and wife Carol of Henderson, Nebraska, Lowell of Geneva, Nebraska, and Gary and wife Pat of Kearney, Nebraska; special friend Faye Hintz-Clayton of Bruning, Nebraska; sister-in-law Bonnie Heath of Lincoln, Nebraska nieces, nephews and cousins. A funeral service for Rodger was held on Thursday, March 23, 2017 at 10:30 a.m. at the United Methodist Church in Geneva. Pastor Michelle Gowin officiated the service. Sondra Myers accompanied Delwin Myers in the singing of “Hymn Of Promise” and “Precious Lord, Take My Hand.” The recorded song “Amazing Grace” was played as the recessional. Pallbearers for the service included Darrell Anderson, Douglas Anderson, Matthew Anderson, Clayton Heath, Chris Nun, Bryan Nun, Kory Hintz, and Kyle Hintz. Interment was in the Geneva Public Cemetery following the funeral service. The Geneva VFW Samuel J. Marsh Post 7102 performed Military Rites. Farmer & Son Funeral Home conducted the services. Online condolences may be left at www.farmerandsonfuneralhome.com Memorials are suggested to the United Methodist Church in Geneva.

Rodger Dean Anderson was born to Melvin and DeVee (Weiss) Anderson on April 17, 1941 in Geneva, Nebraska and passed away on March 20, 2017 at Fairview Manor in Fairmont, Nebraska at the age of 75 years, 11 months, 3 days. Rodger grew up... View Obituary & Service Information

The family of Rodger D. Anderson created this Life Tributes page to make it easy to share your memories.